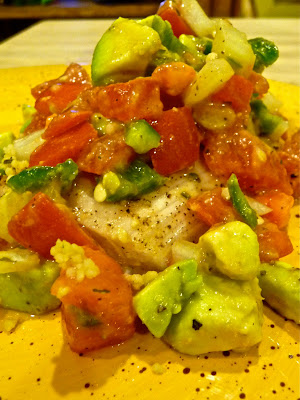 So maybe I shouldn't have written a to-do list, especially not on a public blog where everyone could read it and then see what a failure I am at going through with my to-do lists. I don't really know what has gotten into me lately. As soon as I got laid off I had all this energy and these plans and I thought I was finally going to take care of things because "I had time". Well that didn't last long. After a couple of days I just got extremly lazy and haven't done anything constructive, except for working on my novel which is currently at page 128. So I guess that's a good thing.

Everything else, though, has been kind of put on hold and left behind. Including the cooking of epic recipes that I always wanted to cook but never had time to try. I was thinking about writing a list of those too, but we know what happens to stuff on my lists, so I'd rather not. Which brings me to this mahi recipe —the opposite of long and complicated. It's really a non-recipe, just something I threw together last night at 9 p.m. because —after writing all day— I realized that I hadn't made any plans for dinner. So I just kinda went with the good old idea that good + good = good and put this together. And guess what? It was good.

Season fish with salt and pepper, place in a pyrex and dress with juice of one lemon half. preheat oven to 350 and cook fish in oven for 20 minutes.

In the mean time mix the chopped tomatoes, avocado, onion and jalapeno in a bowl. Season with salt, pepper and cumin and dress with lemon. Mix well.

When fish is ready serve topped with salsa.
Cooked by Chiara "Kika" Assi at 9:50 PM