Pasta with shrimp, zucchini and saffron 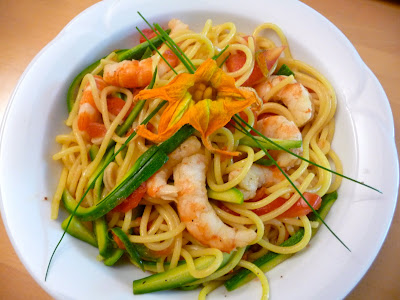 What did I tell you about being on a fish kick? I mean, I seriously can't stop eating the stuff. And that's crazy because I've never been a seafood person. And yet, all of the sudden, all that I crave is shrimp, sole, tilapia, salmon... you name it. I'm not complaining, mind you. For once I crave something that is good for me, so I'm going to ride this wave until it lasts. Because I'm sure that, come the cold weather, fish will go back to being one of my least favorite things to eat. But for now with the temperatures rising and the sun (almost) always shining I'm eating all the seafood that I can.

I made up this recipe the other night, using stuff that I had leftover from making my branzino tartare. I still had some baby zucchini and their blossoms, I had tomatoes... and I had some pretty plump Atlantic shrimp tails I wanted to use. So I thought, why not making a nice pasta with all this great ingredients? I cut the zucchini into matchsticks, minced their blossoms, cubed the tomatoes and, at the very last moment, I decided that saffron would go well with the dish and cooked the noodles in water and saffron instead of plain old water. Even if I say so myself, it turned out divine. The saffron flavor was subtle, but definitely there, and it let the shrimp and zucchini really shine through. It was an experiment, but I can't wait to make it again when I have company.

In a large dutch oven bring water to a boil. Add some rock salt and saffron. Cook noodles according to directions.

In the mean time, cut zucchini into matchsticks, mince the blossoms and cube the tomatoes. Heat olive oil in a large pan, add shrimp and sautee for a couple of minutes. Add prepared vegetables, add a little wine, season with salt and pepper and cook for a few more minutes, until shrimp changes color.