Pasta with zucchini and saffron 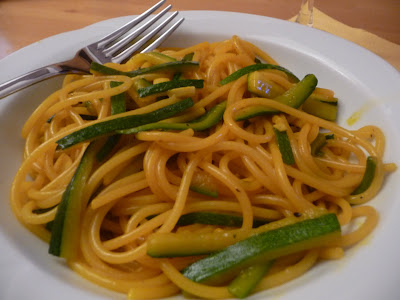 There's been an almost imperceptible shift in the weather around here, one that made me at the same time a little happy and a little sad. I think it's safe to say that summer is pretty much over and the high temperatures are now lurking around the 76 degrees mark at best, while the Northern winds make the evenings and nights a lot chillier.

My last 'real fall' was the fall of 2001, a mere couple of months before I moved to Florida and said goodbye to well definite seasons. Sure, the weather changes in the Panhandle too, but the end of summer doesn't come in September and it surely doesn't make you melancholic. On the contrary, by the time November rolls around most Floridians are so ready for the heat and the humidity to be over they can barely stand the excitement of wearing a sweater for reasons other than trying to survive the a/c at the grocery store or at the post office.

Around here, though, things are different. People throw 'end of the summer' parties and they mean them as in 'let's have one last party outside before the weather turns to shit', not as in 'finally the stupid summer is over'. They also do things like swimming one last time in the lake before season is over or they already start talking about summer with nostalgic tones, which I like, because I always thought best to start being nostalgic in advance.

The season is changing at the grocery store as well, where they are literally giving away tomatoes and zucchini and other summer staples, which is how I've found myself with the vegetable drawer of my incredibly small fridge filled with zucchini. So I had to come up with a few ways to use them up before I live for France tomorrow and this, my friends, is one of ways I came up with. Easy and fast, very end-of-the-summer like.

PASTA WITH ZUCCHINI AND SAFFRON
Serves 4

Cook pasta according to directions.

In the meantime, heat a little olive oil in a large skillet, add shallot and saute until fragrant. Add zucchini, season with salt and pepper and saute for a few minutes, until slightly less crunchy. Add saffron to hot broth, then slowly add broth to skillet and let it cook until most liquid has almost evaporated.