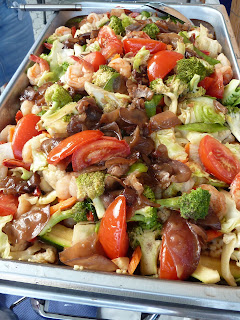 Who said you can't have delicious Thai food in Switzerland? With a view of the lake? Under the stars? Let me tell you, the Thai dinner we had at the Lido di Bissone, the bar/pool/lake access/beach in the little town of Bissone where I live, was simply amazing. The two chefs came from Chiasso, on the Italian/Swiss border, where they have a little take-away restaurant that I must try asap. So they came here and they cooked in a tiny ass kitchen (I know because I work there, so I realize how difficult it is to produce food for the masses in that kitchen) for five hours, always smiling, never raising their voice, being efficient and quick and precise all at the same time. Let's just say that they should be an example to many others who do less and get pissed about everything. Just sayin'. 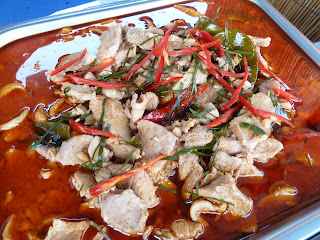 Anyhow, the food was amazing. The menu offered spring rolls — crunchy and not at all greasy, made to perfection — followed by pork red curry (picture above), Thai shrimp (first picture), chicken with cashews (picture below), fried rice, rice noodles with vegetables, beef in oyster sauce, tuna with five spices. It was served buffet style, so you could go back as many times as you wanted to get more. And many times we went. I have a thing for noodles with vegetables, so I'm not ashamed to say that I ate three portions. I know, I know. But what can I say? I love the stuff. I love it so much that I didn't even have time to take a picture of it. 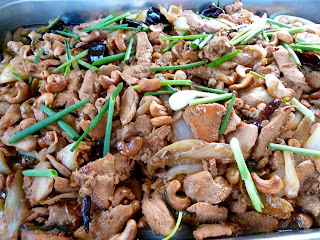 So the Thai dinner was a great success. Many had never had Thai food before and it was great to see how curious and interested they were in a cuisine that is very foreign to them. For those of us who had had Thai many times before was a welcome change. There aren't many Thai restaurants in the area. Hell, there aren't many ethnic restaurants in general. To have all this great food brought practically at our doorstep was a real treat. And eating it at sunset overlooking the lake was just the icing on the cake. What can I say? On Saturdays they usually have BBQs at the Lido, but I hope they will repeat the Thai dinner at least once before summer is over. If they do I'll starve myself all day, so I can eat a fourth serving of noodles!
Cooked by Chiara "Kika" Assi at 2:19 AM