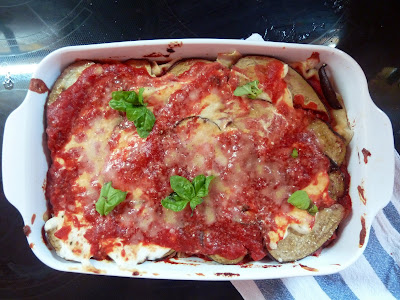 Every once in a while I have a stroke of genius. I know I'm not being very modest here, but if you had tried this mock lasagna the other night, you would have called it a stroke of genius too, I promise. The heat has been relentless lately. We have had high temperatures in the low and mid 90s and lows barely dipping below 70. For Lake Lugano that's very hot.
Of course everyone started bitching.
Gotta love people. In July they were practically crying over the fact that it was rainy and not warm enough. Several of them were parading around crying that summer was already over. Already? It practically started in April, for crying out loud. And now that it's hot out, they are moaning and crying again. Go figure.
My only problem is that we don't have an a/c system in the office yet because the company just moved, so working, especially in the afternoon, is challenging. When I get home I usually sit in front of the a/c for a few minutes to cool off and come back to life. Then I can think about cooking, usually while I drink an ice cold beer.
The other night I invited a couple of friends over and, over some chilled prosecco, I came up with this mock lasagna recipe, using what I had on hand. I call it mock because instead of using lasagna noodles, I used pane carasau, the Sardinian flatbread I had used in this other yummy recipe.
MOCK VEGETARIAN LASAGNA
Pane carasau (Sardinian music bread)
1 large eggplant,sliced
3 cups tomato sauce with basil
2 tubs light cream cheese
Salt and pepper
Extra virgin olive oil
Greated parmesan cheese
Lightly grease a baking dish with olive oil.
Place eggplant slices on a baking sheet, season with salt and pepper and cook for ten minutes at 350°F.
Soak bread in warm waterfor a few seconds. Place a layer of bread on the bottom of baking dish. Cover with a layer of eggplant, a layer of tomato sauce and a layer of cheese. Repear until you tun out of ingredients. Sprinkle top layer with parmesan cheese, then bake in a 350°F oven for 20 minutes. Enjoy! 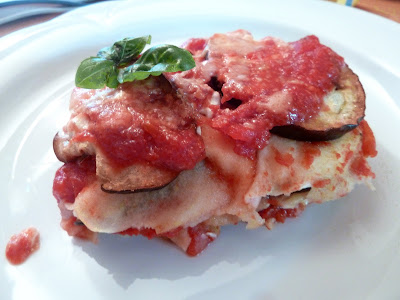 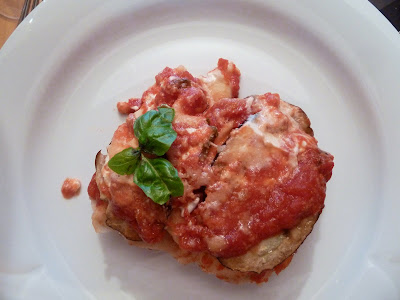