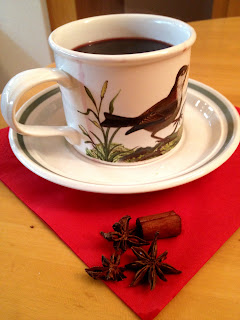 It's December already. Ever since I've started working in August, time has gone by at the speed of light. So here we are, already counting down the days till Christmas. Temps are still not very wintery and I'm a little disappointed because it hasn't snowed yet, but I'm making up for it by decorating the house and preparing Christmasy foods.


Vin brulé, aka hot mulled wine, is one of my favorite things about this time of the year. I first tried it when I was about 14, mingling at a Christmas market in the Dolomites with my friend Giovanna. We were freezing, so we decided to give it a try. It was the beginning of an obession. I liked it so much I order it everwhere I go if I see it on the menu. No wonder I liked Prague so much, they sell it on every street corner at a price so cheap, you just can't say no.


Of course I also make it home. Last night I had it while putting up the Christmas tree and, I have to say, it was one of the best recipes ever. Try it, you won't be sorry.

Place all ingredients in a sauce pan. Slowly bring it to a boil, then simmer for about ten minutes or until sugar has dissolved. Discard solids and serve.