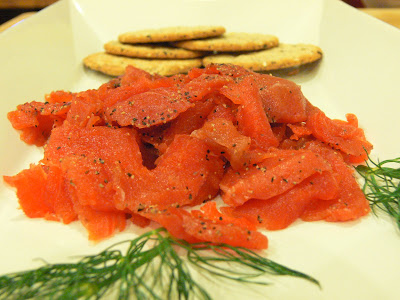 So I have this thing for salmon -for me to eat it it must be either smoked or wild caught. I refuse to eat the farm raised type mostly because it tastes so fishy it makes my stomach turn and also because if you read how they live in captivity and what they eat it will turn you off it forever. Anyhow, I had a beautiful piece of wild caught salmon in the freezer, but it wasn't really big enough to make an entree out of it, so I decided to make gravlax instead. Gravlax is a Swedish dish and, to my knowledge, the only Swedish contribution to world cuisine. Those of you who have read Stieg Larsson's novels will probably know that all they eat in Sweden is toast, coffee and, when they get all crazy and reckless, cereal. Never in one of his huge books does Larsson mention gravlax -which is a pity because it's delicious and easy to make. The only tricky part is that you have to plan ahead for it because it has to marinate for 24 hours. Other than that it's completly idiot-proof.

Place the salmon, skin side down, on a large piece of plastic wrap.

Mix salt, pepper and sugar in a bowl. Sprinkle evenly over salmon, until the flesh is completly covered with salt mixture. Place dill on top of salmon.

Wrap the salmon up, as tightly as possible, in the plastic wrap. Use a second sheet of plastic wrap to wrap again. Place the package in a container (I used a pyrex) and place in the fridge for at least 48 hours. You will notice some liquid forming in the container -it's normal.

After two days open the pacakge, discard the dill and gently wash the salmon with cold water. Place on a cutting board and cut thinly, from the tail end first, detaching each slice from the skin. Serve with dill, crackers, sour cream and slices of lemon.
Cooked by Chiara "Kika" Assi at 10:45 AM