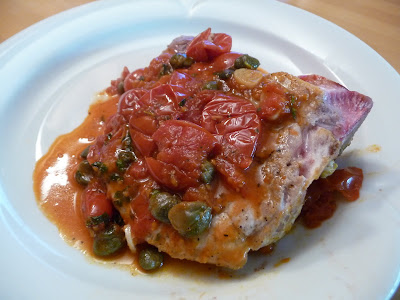 Just to prove to myself and to the rest of the world that I can indeed cook something other than seafood, I made some good pork chops the other night, as I continued watching the World Cup on tv. This recipe was supposed to be made with veal chops, but since I had pork in the freezer I decided it would do. And it did. Quite nicely too.

See, one of the trickiest things about living 5,000 miles away from your boyfriend —apart the obvious ones— is to cook for one. For years I've been used to cook for two which, with his appetite, meant cooking for three or four really. And for all those years I considered cooking just for myself a real drag, which meant that, if I were alone for the night, I'd eat crap standing in front of the fridge, as my dad would say, like a savage. But now things are different. With the prospect of eating in such manner for three months, I decided that cooking for one isn't that much of a waste of time after all. So I started cooking recipes I would normally cook if Tommy or if a guest were here and, guess what? It was a great idea. I mean, if you are eating all alone, in front of the tv, talking to the cat like a lunatic, you might as well do it in style and eat something good, right?

Hence this recipe. "Pizzaiola" in Italian means "pizza-man style" and refers to pretty much anything that is prepared with tomatoes, oregano, capers and anchovies. I used fresh oregano from my miniature garden, which of course made me very proud not only because I have a mini garden, but also because I haven't killed everything in it... yet. If you don't have fresh oregano leaves on hand, use dried. It works almost just as well.

Heat up a little olive oil in a large frying pan. Season chops with salt and pepper and sautee them in the pan until browned on both sides. Keep warm in the oven.


Add anchovy and break into the sauce using a wooden spoon. Put chops back into the pan , add capers, let the chops warm up for a minute and serve immediately.