I'm obsessed with farmers' markets. There, I said it. It's kind of weird because I used to hate markets when I lived in Milano, mostly because I was a pissy teenager and because markets meant only one thing to me: traffic and blocked roads. Also, I didn't like vegetables, so I really saw no point in going to farmers' markets. But now things are different. I love veggies and I love seeing what a great selection markets have these days. Saturday I went to the market in Ponte Tresa, a town on the lake on the border of Italy and Switzerland. And when I say 'on the boarder' I really mean it. I parked my car in Switzerland, crossed the bridge and went to the market in Italy —the reason being that during weekends there's a mile long line to get through customs. I was in heaven. The vegetables, fruits and herbs were wonderful and cheap. With less than 10 Euros I walked away with a bunch of tomatoes, spinach, a cauliflower, zucchini, fennel and asparagus. Not bad, uh? I was so proud of myself, saving money and buying fresh veggies and herbs. And then, of course, I saw a stall where they sold really cute and funky dresses and spent another 30 Euros to buy a dress and a t-shirt. Oh well. I swear, I really really needed both of them.
Anyway, I wanted to make good use of my tomatoes and herbs, but didn't want to make the same old pasta dish, so after some thought I decided to make stuffed tomatoes. What to stuff them with, though? I picked farro because I had some in the pantry and also because I thought it would be a good, healthy choice. I was right. They turned out great, light and refreshing.
TOMATOES STUFFED WITH FARRO
Serves 4
8 fresh, round tomatoes
2 green onions
2 tablespoons capers
2 tablespoons black olives
Fresh herbs
1/4 pound farro 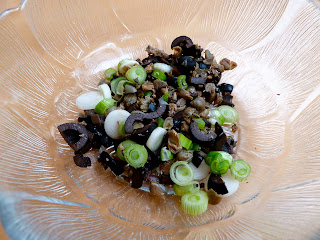 So first you chop the green onion, the capers and black olives and you mix them in a bowl. You really don't need to season with salt because the capers and olives infuse the mix with their natural saltiness. 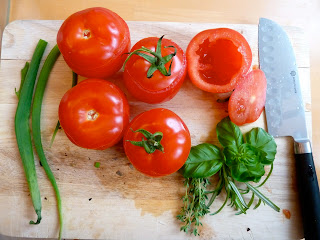 Then cut the tops of the tomatoes off and hollow the tomatoes with a teaspoon. Pick whatever fresh herbs you like — I used rosemary, basil and thyme— and mince them. 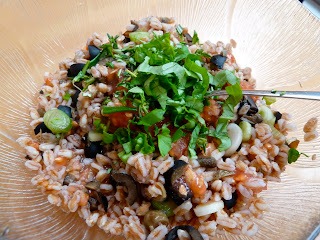 Cook the farro according to packaging directions in abundant salted water. Drain and add to olive mixture. Add whatever tomato you have hollowed out to the bowl and sprinkle with the fresh herbs. Mix well. 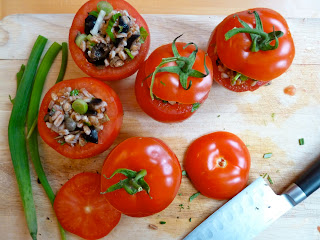 Spoon Mixture into hollowed tomatoes and place caps back on. Place in an oven safe casserole with a half inch of water in it. Cook in a preheated 350F degree oven for about 30 minutes. Serve either hot or cold. 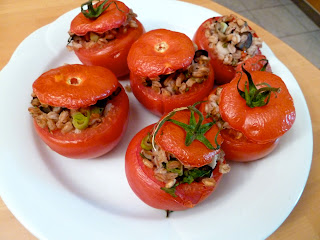