Of carpaccio and memories 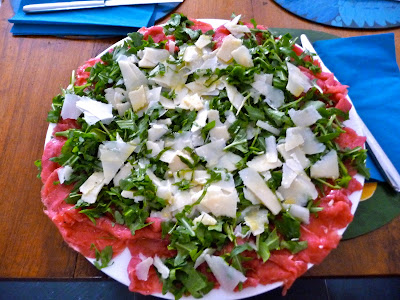 Memory is tricky. And I'm not talking —as many of those who know me might think—of the kind of memory trickiness that makes you remember your fifth grade best friend's phone number —236024— and not how Faraday's cage works when your Physics professor asks you in the 11th grade.

Take a simple red plastic comb, resting on a wooden shelf, next to a vintage shaving kit. I rested my eyes upon it for a few seconds tonight, as I was drying my hair. And all of the sudden I felt an odd wave of affection towards both them cheap comb and the vintage shaving kit. They used to sit by the bath tub in the house where I grew up, and I used to see them on a daily basis. What I found funny tonight, as I was trying to get excess water out of my hair, is that I've been here since April 22nd, and only tonight, more than two months later, did I notice these memorabilia from my childhood. Of course the house I'm staying at right now is not that same house I grew up in, because in the mean time my parents have moved —here first, to the US afterward— but this house in Switzerland is filled with a lot of random objects that belong to them and that, for one reason to another, didn't quite make it to the "let's take these to Florida" list.

Nevertheless, they are cool. Nevertheless, they make me feel cozy, and happy, and somewhat safe in the knowledge that you can indeed come and go, and travel around the world, and then come back to find that some things have never really changed. Like my grandma's china in the cabinet or a picture of a 5-year-old me staring at me from a frame that is almost 25 years old. The house, although not big especially by American standards, is literally permeated with my parents' and grandparents' history.

For crying out loud, I cannot even go to the bathroom without remembering when my mom used that red comb to comb my hair ("Don't tell dad, we used his comb or he'll complain that we leave hair in it") or when, as a teenager, I would still my dad's super sharp, three blade razor hanging from the the little vintage shaving stand to shave my legs ("Mom, don't tell Dad, or he'll complain that the blades are dull").

Then there are all the other rooms. The bedroom where I sleep, in the very same bed I slept in back then. Some glasses in the kitchen that actually pre-date me. The Encyclopedia Britannica, mocking me from a shelf in the living room: you'll never know enough, as I mock her back: you'll never be updated enough.

All these trips down Memory Lane, of course, have some effects. One is that, never before I've felt more like a teenager than I do now. And I'm not only talking about the lack of job and the bizarre sleeping habits. I have also started eating like a teenager again. And before you picture me scarfing down McDonalds and washing it down with gallons of coke, let me tell you: I never ate crap when I was growing up. But I did eat a lot more pasta then I have eaten later on in my 20s and these days I'm eating tons of it again. And I'm loving it. Which explains why I've been posting so many pasta recipes lately. The other related effect is that I have been cooking Italian recipes only, like they were going out of style. No Asian food. No Mexican. Very unlike me, but —hey— it's the truth.

So here's another one. A non recipe really, since all you have to do to make carpaccio is buying it, placing it on a large dish, cover it with arugola and shaved Parmesan and drizzle it with salt and olive oil. But it's delicious and definitely worth trying.
Cooked by Chiara "Kika" Assi at 4:54 AM