Salmon with mustard and dill 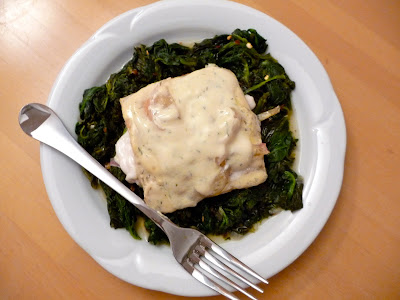 I don't know what's wrong with me and Sundays. Unlike most people, I've never liked them. Even as child, I used to think Sundays had a certain halo of sadness hovering over them, a halo that said 'the weekend is over'. One that also said 'you should do something and have fun today, before the new week starts'. But somehow I never found anything fun or exciting to do on Sundays and dreaded the Sunday boredom much more than the 'back to the grind' routine of any given Monday.
What can I say? I've always been a weird child like that, a child that hated Sundays and preferred books to tv. Especially on Sundays. TV on Sundays, in Italy, is worse than the plague. It must be avoided at all costs.
As a teen and a 20-something I kept quiet about my not liking Sundays, but kept not liking them all the same. I didn't like them for different reasons than those of my childhood. Or, maybe, I should say that some new reasons piled up, high on top of the already existing ones. The reasons were plentiful. Sundays come after Saturday nights and Saturday nights always bore expectations of the great things that could have happened, but never delivered. At least not to me. I usually spent Sundays thinking about the boy I happened to like at the time kissing some other girl at the party or bar or whatever I had been at the night before.
Now that I'm —do I dare say it?— almost 30, I still spend my Sundays in a similar fashion. I sit around and waste a perfectly good day thinking of what happened or not happened on Saturday night, or what happened or not happened in my 20s.
What does all of this have to do with salmon and dill, you might be wondering by now? Absolutely nothing. I'm not going to sit here and pretend that the two things are somehow related, because they are not. And don't let my sour mood deter you from trying this recipe, because it's absolutely amazing and yet very simple to assemble. I found it on my friend Emily's blog, which you should check out if you haven't yet. The only thing I changed from the original recipe is that I used plain white yogurt instead of sour cream because sour cream is not readily available here in Italy, but that's a substitution I've made several times successfully, so feel free to use either one.
SALMON WITH MUSTARD AND DILL SAUCE
(Adapted from Emily's recipe)
1 cup plain yogurt
1/3 cup chopped fresh dill
3 tablespoons finely chopped onion
3 tablespoons Dijon mustard
1 1/2 pound center-cut salmon filet with skin
2 teaspoons minced garlic
Whisk yogurt, dill, onion, garlic and mustard in small bowl to blend. Season sauce to taste with salt and pepper. Let stand at room temperature for 1 hour.

Lightly oil baking sheet. Place salmon, skin side down, on prepared sheet. Sprinkle with salt and pepper and spread with 1/3 cup of the dill and mustard sauce.

Bake salmon until just opaque in the center, about 20 minutes at 400 degrees. Serve with remaining sauce.
Cooked by Chiara "Kika" Assi at 8:45 AM