There are a few things that are very Swiss. Most stereotypes are... well, just stereotypes. Case in point: the famous punctuality of Swiss trains. Yeah. Right. I take a train from here to Milano twice a week because it's more cost effective than driving and let me tell you, Swiss trains are NOT always on time. This particular one is almost always 10 to 15 minutes late and it comes from Zurich, mind you. Swiss people from Zurich speak German and like to think of themselves as "the real Swiss", implying that the Swiss from the south, who speak Italian, are not as Swiss as them. Well, I guess that regardless of that, they still cannot get the train to Chiasso in time. Unless I'm running late, of course. Then it's there early, of course.
So if we cannot count on Swiss trains being on time, what can we count on? Amazing cheese. Even better chocolate. And fondue. Fondue is quintessentially Swiss, in all its forms. There's of course cheese fondue. And chocolate fondue. And then there's fondue Bourguignonne —cubes of filet mignon cooked in sizzling hot oil— which is delicious but makes your house, your clothes and your hair smell like a cheap Chinese restaurant for days. Which is why, when I eat fondue at home, I prefer the Chinoise (Chinese) version: thinly sliced beef —think carpaccio— served raw, then cooked by each guest in an aromatic broth, and accompanied by the same dipping sauces you would use for a Bourguignonne.
So here's the thing. First you have to have good meat, as good a meat as you would use to make carpaccio. Second, you have to make a good broth —it's simply not enough to throw some random canned broth in a pan and use it. If you can't make your own broth, which is understandable because it takes a long time, at least use the best cubes money can buy and add some herbs and spices to it. Last, but definitely not least, don't buy crap jarred sauces. Seriously. I'm famous for my hatred for jarred mayo and the reason is if you have an immersion blender there's absolutely no excuse not to make your own mayo and, therefore, your own sauces. It takes literally two seconds to make the basic mayo and a few more to customize it into four delicious dipping sauces. Traditionally, fondue is served with white rice and french fries as sides. If you ask me, making the rice is pretty much superflous since everyone attacks the fries and nobody eats it, but it's tradition. So I make it anyway.
FONDUE CHINOISE
1/2 pound of thinly sliced beef tenderloin per person
Note: slice the beef right before serving so it doesn't get dark around the edges.
For the broth:
8 cups of water
4 beef broth cubes
Fresh thyme
One onion, chopped
A few black peppercorns
Prepare the broth in a regular stock pot or directly in the fondue pot, then place in the middle of the table and fire up the flame to keep it nice and hot.
And now, for the dipping sauces...
Basic mayo recipe:
Place 1 egg, 1 cup of oil, a pinch of salt, the juice of a half lemon and a teaspoon of mustard in a cup. Place immersion blender all the way to the bottom, turn on and slowly lift it to the surface. Done. It's that easy.
Curry sauce:
Add garam masala, cumin, turmeric and onion powder to basic mayo recipe. 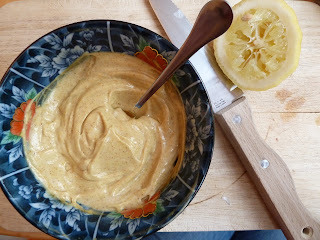 Cocktail sauce:
Add two tablespoons of ketchup, a splash of cognac and a splash of Worcestershire sauce to basic mayo recipe. 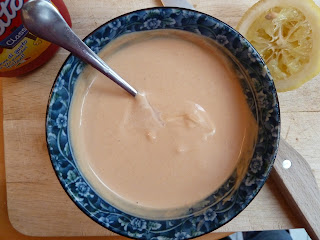 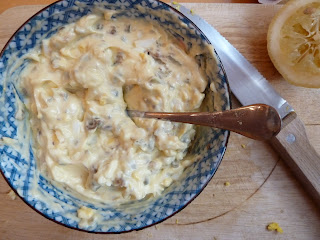 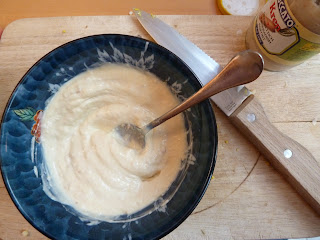