No. They are not called 'hospital' shrimp because they are served in hospitals. As good as Swiss hospitals are, they don't serve gourmet food. The reason why we called them 'hospital shrimp' is that my dad saw this recipe on a tv show while he was at the hospital with pneumonia back in December. He saw it, liked it, and told everyone in the family about it, so a few days later, when he was released from the hospital, we decided to make them on Christmas Eve as an appetizer. They pleased the whole family, so they have become a family staple since then. The beauty of this dish is that is very easy to put together, but it looks really great and it's easy to serve at parties as finger food. So, if you are hosting a little Easter get together this might be a good addition to your menu.
"HOSPITAL" SHRIMP
Large shrimp, peeled with tails on
1 packaged pie crust
As many thin pancetta slices as you have shrimp
1 egg
Poppy seeds 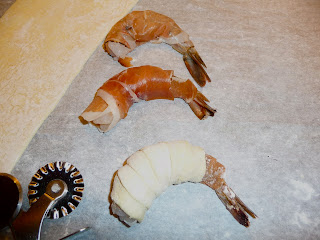 Wrap each shrimp with a slice of pancetta. Cut pie crust into half inch strips and wrap each strip around the shrimp over the pancetta. 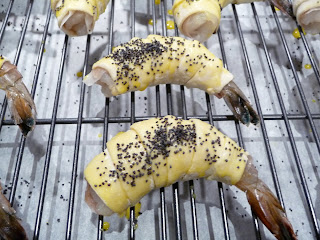 Beat egg in a bowl with a tablespoon of water and baste shrimp with egg mixture. Sprinkle with poppy seeds. Place directly on the oven grid (if you palce them in a pan the bottoms will be soggy). 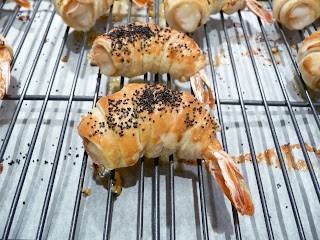 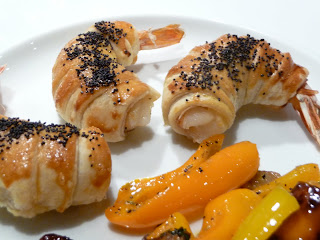