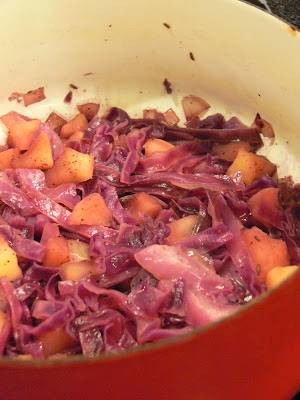 Man, am I getting old. First I start eating cauliflower (and liking it!), then all of the sudden I'm yearning for some cook cabbage. I'm getting old -that's the only explanation. I grew up loathing both vegetables, as my mother patiently said "One day you'll grow up and like them." I couldn't believe her. I was pretty damn sure that she was wrong and that never in my life I would consider cabbage a treat.

Well, now I do. It started off innocently enough with making -and loving- cole slaw. The next natural step was trying it cooked, something that I put off as long as possible. But the idea of eating slaw for the tenth time in a row convinced me that something had to be done. It was time to tame the red monster and cook it into submission. And that's just what I did. The idea of having cabbage with apples came from an old magazine of mine, Cooking Light of course, that suggests that mixing cabbage with apple is a great way to get kids to eat it. And since I'm a big baby about my vegetables I thought it would be a great way for me to approach it as well.

Heat a little bit of oil in a large skillet.

Sautee the onion until soft, then add the cabbage, honey and 1/2 cup of water. Cover and simmer until the cabbage is crisp tender, about ten minutes. Add apple, vinegar, salt and pepper. Cover again and cook for about 5 minutes longer.
Cooked by Chiara "Kika" Assi at 7:52 PM

Email ThisBlogThis!Share to TwitterShare to FacebookShare to Pinterest
Labels: Side dishes, vegetarian