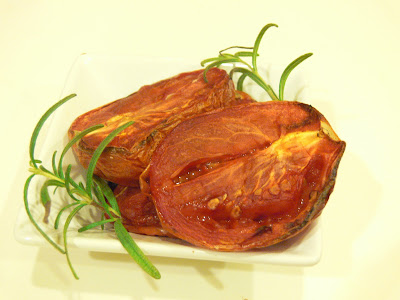 So where's the chicken, you might ask? It obviously didn't make it into the picture, the main reason being that I was hungry and impatient and I butchered it in such a horrible way it wasn't much of a sight. Also you might notice that the recipe -even the title actually- calls for sun-dried tomatoes, something that isn't in the picture either. Well, here's the thing: I had a bag of sundried tomatoes in my pantry and I knew it, so I obviously didn't stop by the store to get more. Little did I know that the little buggers can go bad. Oh, yeah. Who knew? I certainly didn't. I thought they were indestructible, both because they were dried and because they were in an airtight bag in a dark pantry.

Well, I was wrong.

As soon as I opened the bag I figured that there was something weird going on. The tomatoes were... black. Still dried, but black. And didn't smell like tomatoes anymore. Further investigation led me to discover that they also didn't taste like tomatoes, but more like tar. So I had to improvise and make my own sun-dried tomatoes, or maybe I should say "oven-dried tomatoes". They turned out good. I cut them in halves, sprinkled them with salt and drizzled them with EVOO and a little balsamic vinegar and in they went, with a couple springs of rosemary to dry up. Try them, they are pretty damn good.

In a small bowl mix together the tomatoes, cheese and thyme and set aside.

Use a sharp paring knife to cut a horizontal slit through the thickest part of the chicken breast halves to create a "pocket". Stuff each pocket with the tomato and cheese mixture. Season chicken with salt and pepper to taste and dredge in flour.

Heat some olive oil in a large skillet, add chicken and brown it on both sides. Remove it from pan and keep warm.

Add vermouth and bring to a boil. In a small bown stir together cornstarch and a couple tablespoons of stock, then add to the pan together with remaining chicken stock and tomato paste.

Return chicken to pan, bring to the simmer and cook covered over low heat for about 10 minutes, basting occasionally with the sauce.
Cooked by Chiara "Kika" Assi at 11:09 AM

Email ThisBlogThis!Share to TwitterShare to FacebookShare to Pinterest
Labels: chicken