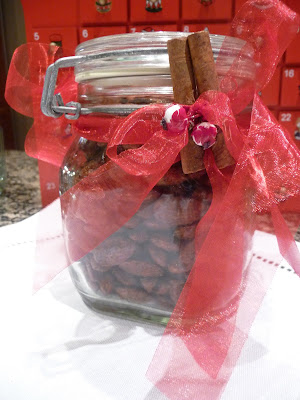 I woke up this morning to find out that the cat, Ernie the terrible, had decided to take a few ornaments down from the Christmas tree and put them on couch. Apparently he thinks that they look much better there because he has been doing this every night since we put up the Christmas tree on Sunday. I also woke up to find out that my broken knee isn't getting any better -in fact it feels like it's getting worse. And since I also feel kinda lonely and bored I decided to do two things: make Christmas presents and moan and complain here on the blog. As The Kitchen Witch pointed out in one of her recent posts "This blogging stuff is kind of cool. I get to bitch to a much wider audience. It's very cathartic."

She's right. And she's a wonderful writer, so if you haven't done so yet, check out her blog.

Now, on with the complaining. I have just listened to a voicemail message that made me want to throw the phone out of the window. This morning I'm in such a grouchy mood I'm screening calls. All of them. So when my not-so-dear boyfriend called, I didn't pick up. Which is good, I guess, since the message alone made me mad enough to consider throwing a $300 iPhone out of the window. He was supposed to come home Monday night, but that quickly became Tuesday. Which is fine. I'm having such a great time sitting here with my broken leg, trying to keep the cat out of the Christmas tree! In the mean time he's in Key West, "working" on a boat and basically being on vacation. He's so busy he can't even bother to call, Sunday or Monday, and when he finally calls on Tuesday is to ask me if it's ok for him to come on Wednesday -today- by noon. Which, of course, is a retorical question, since it's more than clear that he has already made up his mind. Whatever. What threw me over the edge is the message I just listened to. At noon he calls to tell me that he's not even leaving for another couple of hours, which means that maybe -if he leaves on time, if there is no traffic, if he never stops to pee or get gas- he'll be home at 8 p.m.

By then I'll have somehow carted my ass to an oyster party -180 pounds of oysters... can you imagine that?- bring my spiced almonds as a gift. See? There was a connection between the bitching and the recipe!

Combine 1 tablespoon water and egg white in a large bowl; stir with a whisk until foamy. Add almonds; toss well to coat. Place almonds in a colander, and drain 5 minutes.

Combine almonds, sugar, and next 5 ingredients (through chili powder) in a large bowl; toss to coat. Spread almond mixture in a single layer on a jelly-roll pan coated with cooking spray. Bake at 300° for 15 minutes. Stir almond mixture; reduce oven temperature to 275°. Bake an additional 40 minutes, stirring every 10 minutes. Remove from oven; cool 5 minutes. Break apart any clusters. Cool completely.