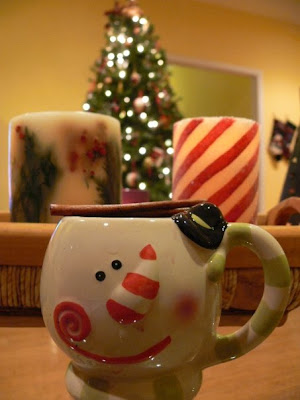 As I was saying in yesterday's post, while my mom worked relentlessly on getting my Christmas tree decorated I was working as relentlessly on drinking a whole pot of hot apple cider -I figured it would help ease both the pain and the boredom. I don't remember exactly when I became such a fan of hot, alcoholic drinks, but I suspect it has something to do with going to the Christmas open air market in Bressanone, Italy. Nowadays going to this quaint mountain markets has become such a fad that people jam up every possible highway and road leading to the Dolomites, but back then, in the early nineties, only locals and people who had vacation homes in the area knew about them.

It was probably 1993 or so and my family and I were staying at our place in the Dolomites for a long weekend -December 7 is a holiday in Milano because it's Saint Ambrose, Milano's patron saint; Demeber 8 is a holiday in Italy because it's the Immaculate Conception. That long weekend, every year, was also the first weekend when the ski lifts would open, which is mainly why we were in the Dolomites to begin with. But I digress. The point is that that year we decided to go check out one of these Christmas markets in Bressanone. I was 13 and was entering that age when you can't possibly go anywhere without a) your Walkman b) your friends. So we had my very good friend Giovanna in tow and, as soon as we got to the open air market, the two of us started walking a few feet behind my parents, pretending not to know them, pretending to be there by ourselves. I know, I know. But, hey, we were 13. And while my mom and dad were checking out beautiful hand made, hand carved ornaments and trinkets, Giovanna and I followed the sweet scent of cinnamon and cloves wafting through the cold December air. It led us to an old man stirring a giant pot, a cauldron really, filled with vin brule', mulled wine. It was instant love. We each bought a cup and slowly sipped on it as the snow started to fall. It was the best drink we had ever had.

Melt butter in a large saucepan over medium heat. Stir in sugar and next 4 ingredients (through cinnamon sticks); cook 1 minute. Add cider and next 4 ingredients (through lemon rind); bring to a simmer. Reduce heat to medium-low; simmer 15 minutes. Remove from heat; stir in applejack. Strain; discard solids.
Cooked by Chiara "Kika" Assi at 11:08 AM