As ash cloud infested air-travel goes, I have to say that my journey from Fort Myers to Atlanta to Milano went exceptionally well. Sure, there were a couple of drawbacks, but I consider the fact that we reached our destination without any of our engines getting damaged by volcanic ash a major success.

The cat, too, was an absolute angel to travel with and I can't tell how grateful I am for that. Not only he didn't let out a peep during the whole trip, he also avoided other major headaches (for me, not for him) like pooping or peeing. I'm telling you, this animal travels like a pro!

Believe it or not, I also half enjoyed my meal on the long haul between Atlanta and Milano. No, I have not lost my mind. But since I'm well aware of the fact that you usually get to choose between rubbery chicken and smelly fish, I decided to try something new and, when I booked my flight, told them I am a vegetarian.What a  good idea that was. While the poor soul next to me was moving his sad looking piece of chicken breast and mashed potatoes around the tray, I literally feasted on a spicy potato and vegetable curry over white rice. Who'd have thought? And to add insult to injury, a few hours later my vegetarian breakfast also turned out to be fantastic —who doesn't love a toasted multigrain bagel with cream cheese?— while his knock-off, microwaved egg mc muffin looked and smelled (and I'm guessing here, tasted) awful.

As I mentioned before, though, there were a couple of less-than-perfect moments. On the first, short flight to Atlanta I was supposed to seat in the front row, which would have been really nice, but as I was boarding the plane (second to last passenger as usual) they told me I couldn't sit there because I needed to have a seat in front of me so that I would have a place to shove the poor cat. So they made me trade seats with the person that was right behind me who, needless to say, had a ticket for seat 44F -you know, the charming one all the way to the back of the plane where you are so close to the bathroom you can smell it.

On the second, longer flight, my only complaint, other than the polar temperature and the flimsy blanket I was given to stay warm, is that while I was sleeping like a baby some genius sitting close to me decided it was time to check out the sunrise from up above, which woke up the whole freaking plane. But well, who cares now? In three days I've already seen great friends, had lots of fun and ate delicious food —the plane ride is already nothing more than a vague memory. Here's some of the things I've feasted on this weekend: 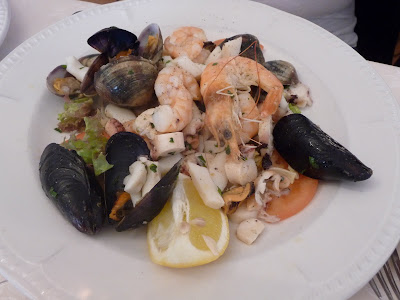 Seafood salad at La Palma, a great little restaurant on the lake here in Bissone, Switzerland. 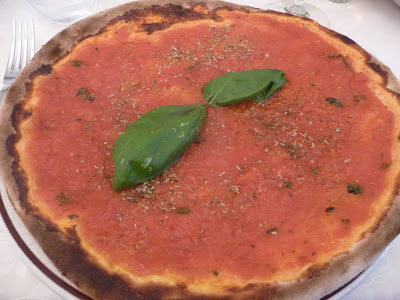 Again from La Palma: my favorite pizza in the world, a very simple marinara made with just tomato sauce, garlic and spicy olive oil. Delicious. Their crust also happens to be one of the best I've ever had. 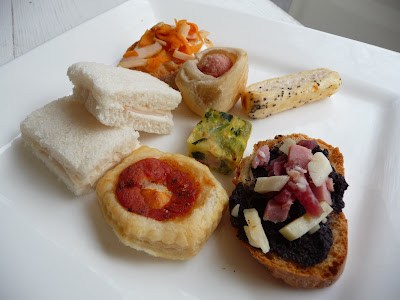 A Milanese institution: the aperitivo. Which means that during happy hour you receive tons of delicious free food. What's not to love about that? And this happens in EVERY bar, which makes it really fun. 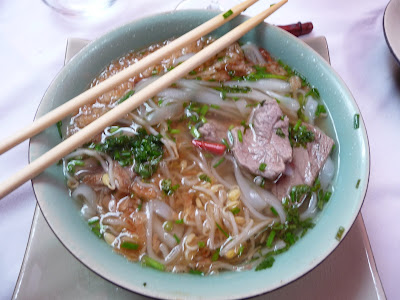 And of course pho, which I have to try everywhere I go. I had it at a cute little place in Milano, called Vietnam Mon Amour. It was the first of many ethnic restaurants I was looking forward to try while I live here. The list is long, but I'm sure I'll get through it.
Cooked by Chiara "Kika" Assi at 4:29 AM

Email ThisBlogThis!Share to TwitterShare to FacebookShare to Pinterest
Labels: Travel