I learned to love lakes only recently, as a twenty-something spending two months between Lake Como and Lake Lugano. As a child lakes made me sad, although it would be difficult to say why. I think they sort of conveyed an almost impalpable feeling of melancholy, one that I was never able to explain to lake lovers nor to the rest of my family. My paternal grandparents owned a lake house on a small, picturesque lake in Piedmont, Lake Orta. I spent most of my childhood secretly wishing they hadn't bought the place, for I was sent there to "breathe some fresh clean air" every June and, truth be told, I hated being there. Don't get me wrong, I loved my grandparents dearly and they were both fantastic in their two very different, almost opposite, ways. And they loved the lake and the lake house and since I was such a polite kid, I never really said out loud that the lake did nothing for me. At least not to them. Every day, when my parents called to say hello, I would half whisper to my mom that I was bored and that I wanted to go home. Soon, she always said. Soon, of course, would never come fast enough. The days stretched out endlessly, as I walked the grounds pretending I was someone else somewhere else. I helped grandma pick vegetables from the garden. I learned the names of all our flowers from grandpa. I waited for the bell tower clock to strike six o'clock because I knew that that was the time when my mother would call. The afternoon took forever to end and the lake sat there, still and silent, much like everything else in the village. 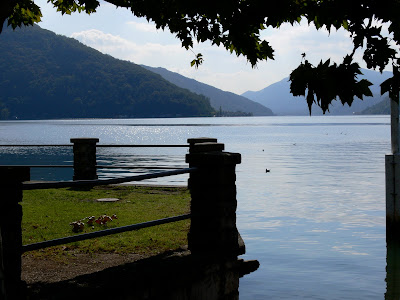 Fast forward twenty years. It's 2007 and Tommy and I take two months off so that I can show him around Northern Italy. We stay at my parents' house on Lake Lugano, the very house from which I'm blogging right now. And all of the sudden, the lake seems beautiful to me. Granted it's not the same lake, but still. I even ended up liking Lake Orta, and all the other lakes in between. 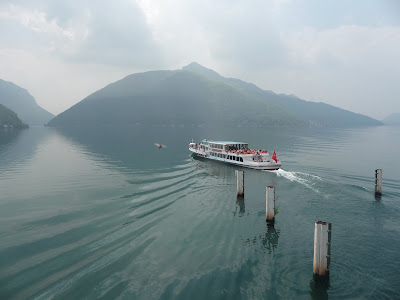 Now I even enjoy the lake when the weather is less than stellar, like it was the day I took this picture. The mountains reflecting in the water and the ferry lazily going by are reasons enough to smile these days. I guess the older you get the easier it is to be entertained. Or maybe the older you get the least likely you are to miss your parents or your house while you are at the lake and all of the sudden you don't find it sad at all. Or maybe it's just that now this is my home, at least for the time being. 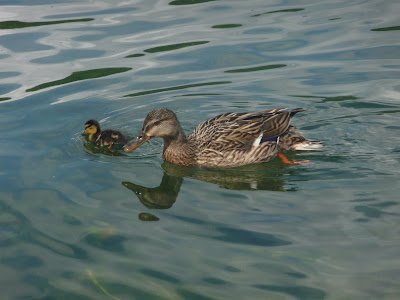 And there is one more thing about lakes that I love: ducks. Especially ducks with their babies. I saw the first baby duck of the season not long ago and I spent twenty minutes watching her following her mom around, swimming super fast to keep up and following the big ducks around to eat the stale bread kids were throwing around. Another sign of old age? Perhaps.
Cooked by Chiara "Kika" Assi at 2:52 AM