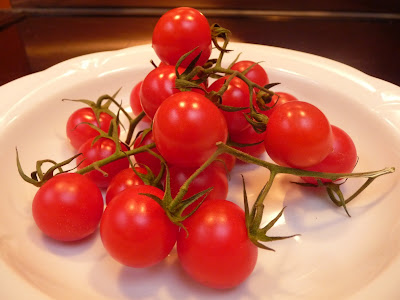 One of the things I missed the most during the nine years I lived in the U.S. is bright red, great tasting tomatoes. Which, come to think of it, is kind of a non-sense since tomatoes originally were brought to Europe from the Americas. Some believe that the Spanish explorer Cortes may have been the first to bring a small yellow tomato plant to Europe from the Atzec city of Tenochtítlan in 1521. Others believe Columbus was the first European to take back the tomato as early as 1493. Regardless, the Italian physician and botanistPietro Andrea Mattioli wrote about the new fruit in 1544 and named it "pomo d'oro", golden apple. Since then, Italians have fallen in love with tomatoes and have become the fifth biggest tomato growers in the world, after much bigger countries like China, the United States, Turkey and India. I'm not a tomato expert, I've done my research on it though.

As most Italians, I absolutely adore tomatoes in all their shapes and colors —from beefsteaks to cherry, and from green to yellow. So imagine my shock when I moved to Florida, the place where tomatoes come from, and they were... bland. Especially in the summer. I was baffled. I mean, how could it be? Thinking about it in retrospect I should have come up with this theory years ago, but I'll be honest and tell you that it came to my mind only very recently. How can the same fruit grow to be the same in soils and climates that are completely different? Simple: it can't. I'm guessing —I'm no botanist— that the heavy rains and the relentless Florida heat are a little hard on tomatoes and they leave them tasting like they have been watered-down. So, anyhow, I was very happy the other day when I went to the grocery store and found the tomatoes pictured above —pomodori from Pachino, Sicily— which are round, and bright red and downright delicious. They are amazing on their own, maybe with just a little salt and drizzled with EVOO, but I decided to go all out and make a nice pasta with them, although I was cooking just for myself on a quiet Friday night. The result was amazing, even though I say so myself! 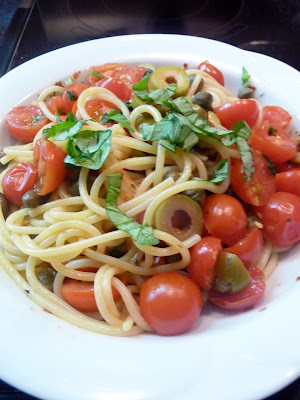 Cook spaghetti according to directions.

In a large serving bowl mix tomatoes, capers and olives. Season with crushed red pepper and very little salt (capers are very salty, so be careful), dress with olive oil and lemon juice. Set aside.

When spaghetti is ready, drain and add to the bowl. Mix well, sprinkle with basil and more olive oil if needed.
Cooked by Chiara "Kika" Assi at 6:16 AM