Five-spice salmon and leeks in parchment 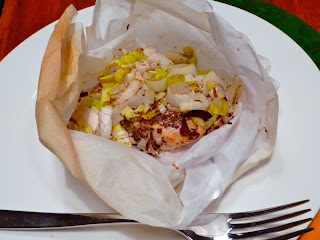 As a child I loathed fish. As a teenager I still loathed it. It took me a 5000 mile move to Florida to get me to like the stuff. Fish in Florida was different. It was delicate and it came with all kinds of fruity sauces.  It tasted of Caribbean vacations and summer nights and drinks at sunset. In other words, it didn't taste like fish at all.

There was one exception though. Salmon. Salmon was the first fish to make it into my plate... or, actually, I should say into my mouth, because there was no actual plate involved. It involved a screaming child, an unprepared set of parents and a smoked salmon sandwich. To this day, every time I see or eat smoked salmon I can't help but thinking about these modern parents I see going everywhere —China, the post office, on a walk— with a bag full of food for their kids. My parents never carried food for me. There was absolutely no eating allowed in the car and, in general, eating in between meals was frowned upon. It will ruin your appetite.

But there was one time where this strategy backfired. Big time. It all happened when I was a toddler a few months short of 2. En route from Milan to the United States my parents and I had a layover in London. And I got hungry. So hungry that I started screaming on top of my lungs. I wanted food. And I wanted it right away. The only option seemed to be a little cart where an old man served smoked salmon over thick, salted butter and brown bread. Not exactly baby food. But, hey, desperate people do desperate things. My dad bought a sandwich and they shoved it in my mouth. I instantly stopped crying. And I ate the whole thing. From that day on, salmon and I were friends. And for about twenty years after that day, salmon was my only friend of the seafood variety.

Later on, I learned to enjoy fresh salmon as well as the smoked kind. I have to thank Tommy for this, because he's the one who made it for me for the first time, baked with a Mexcian style salsa on top. And that was beginning of many other fresh salmon recipes, including this one that my great friend Carolina and I made at her place last week. One last note: if you have never tried wild caught salmon, do so immediately. I cannot stand the farm raised variety and once you'll try the wild kind, you'll never go back either.

Preheat oven to 425°.
Combine first 5 ingredients in a small skillet over medium heat; cook for 1 minute or until fragrant. Transfer toasted spices to a spice grinder or coffee grinder; grind until fine.
Cut 4 (12-inch) squares of parchment paper. Place 1 fillet in center of each square. Sprinkle evenly with salt and spice mixture; top fillets evenly with leeks. Fold paper; seal edges with narrow folds. Place packets on a baking sheet. Bake at 425° for 20 minutes or until puffy and lightly browned. Place on plates; cut open. Serve immediately.
Cooked by Chiara "Kika" Assi at 10:00 AM