Comfort me with ham soup 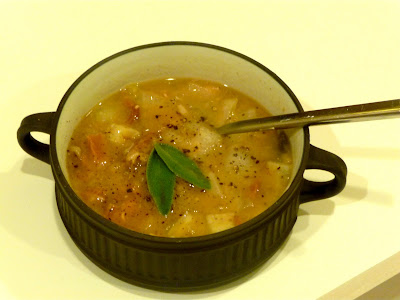 Yesterday I finally went to the doctor to have my knee checked and was mildly surprised when he told me that I have a fractured knee cap. The good news, he said, is that it doesn't need surgery and doesn't need a cast. Only six weeks of crutches and a removable knee brace. At first I was giddy with excitement -who wouldn't be after finding out she doesn't need surgery? But then reality sunk in. The truth is, I wasn't expecting a broken bone for the simple reason that I had never broken a bone before. I skied like maniac for twenty years, went ice-skating, horse back riding, played tennis, soccer and volleyball, waterskied, wakeboarded and surfed. And I never broke a bone. Then I cook Thaksgiving dinner, I slip, and I end up with a fractured knee cap. Seriously. What the hell?!?

Anyhow, after this first realization sunk in another one dawned on me. Six weeks with crutches is a long freaking time. I mean, in six weeks we'll be in 2010 and Christmas will have come and gone, and so will have New Years. And for this long stretch of time I'll be limping around like little Timmy, only with a less cheery attitude and more alcohol in my free hand.

A bunch of questions immediately arose. How am I going to decorate the house? What about the Christmas tree? Who's going to cook now that I can't stand for more than 2 minutes without getting tired? How stupid am I going to look in my fabulous red dress, killer heels and crutches? What am I going to do about our plans to go to New Orleans next week?

The only one I could answer right away was the one about the cooking. I'll still cook. I'll take a chair and sit by the stove and limp around the kitchen to gather ingredients, but I'll cook nevertheless. Otherwise I'm going to go crazy and crazy right now is no good since I'm already pissed. So I cheered myself up by making one of my favorite soups in the world, my version of the US Senate ham and bean soup. I had leftover ham from when my friends were here for Thanksgiving and also some leftover mashed potatoes. Bean were in the pantry and my fridge was packed with fresh herbs -what else could I ask for? (Besides a healed knee, that is.)

Place ham bone, water and one chopped onion in a large soup pot. Bring to a boil, add thyme and lower heat to low. Simmer for at least four hours.

Remove and discard solids. Add beans to ham broth, season with salt and pepper and add sage. Simmer on low for two hours, until beans are tender. Add a chopped onion, mashed potatoes and ham meat. Simmer for another 20 minutes, until warm. Adjust seasoning and serve.
Cooked by Chiara "Kika" Assi at 3:23 PM