Polpette (meatballs)... to get rid of the leftovers 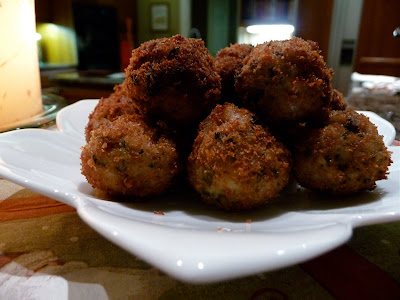 So Christmas has come and gone and now we are left with tons of shredded wrapping paper, five pounds parked on our bellies and asses (seriously, how do you gain 5 pounds in two days?!?) and, of course, tons of leftovers. If -like me- you have an Italian family, you probably have had fish on the Christmas Eve and meat on Chistmas -which means that you have less leftovers than someone who had turkey, ham and a roast of beef. Still, you might notice that you have a truckload of various meats leftover and the idea of having one more sandwich might make our stomach turn at this point. So do this instead: make meatballs. Not the kind that you simmer in tomato sauce and eat with spaghetti. Those barely exist in Italy, except for in Calabria, which is far, far away from where I grew up. No. Where I grew up, in Milan, meatballs are inteded to be a) an appetizer
b) a way to get rid of leftover meat

Give it a try. This recipe almost isn't a recipe -not in the American sense of the word. There's no fixed quantities, no tablespoons of this or cup of that. It's one of those recipes that you have to "feel" and when it "feels" right you will know. Here's the guidelines to make the best polpette:

Leftover ham, turkey or beef or a combination
Ham or prosciutto (if you don't have it lefotver already)
A couple of eggs
Breadcrumbs
Grated Parmesan cheese
Salt and pepper
Minced parsley
Minced onion (optional)
A pinch of nutmeg

Pulse meat in a food processor until coarsly ground. Transfer in a large bowl, season with salt and pepper and add parsely. Add an egg at a time, a little Parmesan and breadcrumbs. Keep adding until the mixture rolls up easily into balls but isn't too dry. Fry in a deep fryer or in a pan with vegetable oil.
Cooked by Chiara "Kika" Assi at 7:42 AM