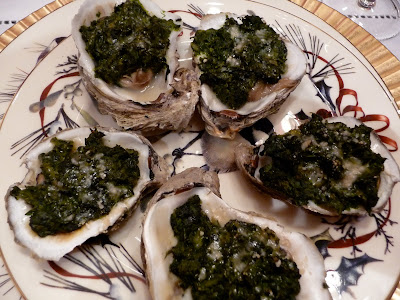 I've been on an oyster kick lately. I've been ordering raw ones like crazy while I was in Key West and have been lucky enough to go to an oyster party the other night where I had amazingly plump oysters cooked on the grill. My favorite way to cook and eat oysters, though, is making Rockefellers. I used to order them in restaurants all the time and although most were good, I always thought they could be better. See, I'm picky about my oysters Rockefeller. A purist. Don't put any Hollandaise on them. And don't smother them in cheese. I like to taste the actual oysters, the spinach, the tabasco. So I went through my cookbooks and found a recipe that sounded authentic and delicious in a book called "America the beautiful". Once I made them that first time I was hooked, and so was my boyfriend and family. They are easy to make and they are delicious -perfect for a dinner party or for a holiday buffet. The hardest part is schuking them, but if you have the right tool I've discovered that even that is a breeze.

Mince the shallot, green onion and celery and sautee them in a little butter until crisp tender. Add thawed out spinach, season with salt and pepper and cook for about 5 minutes. Transfer vegetable mixture in a blender or food processor and pulse until creamy. Add vermouth, hot sauce to taste and bread crumbs. Stir until blended.

Place rock salt in a thin layer in a baking dish (or two, if your baking dish isn't big enough to accomodate all the oysters). Open oysters, discard empty half shell, and place oysters on their shell over the bed of salt. Spoon a tabelspoon of spinach mixture over each oyster. Sprinkle with cheese. Cook for 10 minutes in preheated oven and serve immedietly.
Cooked by Chiara "Kika" Assi at 6:44 AM