"Cream" of cauliflower with turmeric 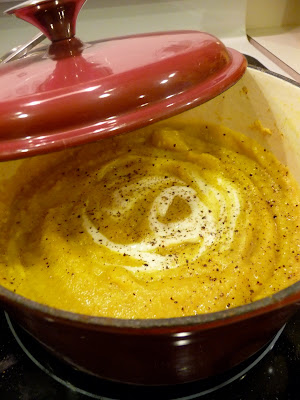 After failing miserably at eating healthy both during January and February, I'm currently trying to make March my best month yet. We'll see how long that lasts. I figured I have about 4 to 6 weeks before taking off to Italy and I'd like to be as healthy and productive as possible between now and then. Of course it's a little tricky, being productive before moving, I mean. Moving is stressful and when you are moving across an ocean the stress tends to peak to new heights, so the logic response to that —for me— would be to sit around, drink wine and eat cheese. But, alas, I can't. For a number of reasons. The first one might sound shallow and vain. I really don't want to move to Italy with an ass the size of Brazil and my clothes not fitting me anymore. The second reason, I admit, I care less about. I have been told that I have to pack and organize before I leave —something that I could do while drinking wine and eating cheese, but requires me to get up from the couch.

Mind you, I'll still drink wine. Because let's be honest: I don't think I can stay sane, pack and organize without a little help. But the food, I've decided, has to be healthy. And good for me. Hence this "cream" of cauliflower, that contains no cream at all. I invented it after having a long conversation about anti-cancer foods with my mom, who's reading a very interesting book on how to prevent it by eating the right things. Cauliflower, turmeric and black pepper are all ranking high in preventing cancer and I have to say, after taking a first spoonful of my new creation I was incredibly pleased with the result. It's great for you and it tastes amazing. What else could one want?

CREAM OF CAULIFLOWER WITH TURMERIC

Place broth and cauliflower in a large pot and bring broth to a boil. Season with salt and pepper and sprinkle with turmeric. Reduce heat, cover and simmer for about 15 minutes, until florets are tender.
Puree with an immersion belnder. Stir in yogurt, adjust seasoning and enjoy hot or cold.
Cooked by Chiara "Kika" Assi at 12:51 PM