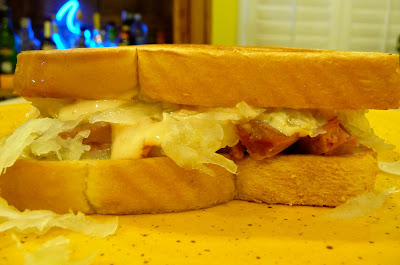 Reuben sandwiches are one of those things I never knew existed growing up in Italy. First of all, most Italian sandwiches, panini, are commonly made with two or three ingredients, and generally none of them are mustards or sauces. Then there's also the fact that corned beef isn't readily available in Italy, which makes making reuben sandwiches kind of difficult.

So when I moved to the US in 2001 there were all these news sandwiches looking up at me from menus, sandwiches with names that I didn't recognize like club, French dip and, of course, Reuben. Who the hell was Reuben, I asked? No one knew. Apparently a man named Reuben Kulakofsky, a Lithuanian-born, Jewish grocer from Nebraska invented it as part of a group effort by members of Kulakofsky's weekly poker game on the1920s. One of the poker players, a man named Schimmel, owned a local hotel and put the sandwich on the hotel's restaurant menu, making it famous —first locally, later nationally. Of course, as with every good food-related myth, there's other versions of the story. Some others believe that the reuben's creator was Arnold Reuben, the German-Jewish owner of the now defunct Reuben's Delicatessen in New York, who would started making the sandwich around 1914. There's many other stories, of course, which I won't bore you with: the point is Reuben sandwiches have been around for about a century and they are a great way to get rid of left over corned beef.

Since we had a ton of corned beef leftover from our belated St. Paddy's celebration, Tommy decided to show me how a good Reuben sandwich is made, although because we are also trying to cook out of our pantry before we move to Europe, we made our sandwiches with —brace your selves— white bread. Which I know is almost sacrilegious, but that's what we had. And to be honest, buying a whole loaf of rye just to make two sandwiches would be crazy. And... I don't like rye. There. I said it. So on to the recipe, shall we?

Butter each bread slice on one side and toast under the broiler or in a panini press. In the mean time, warm up the sauerkraut in a small pan. When bread is lightly toasted and butter has melted, add corned beef, sauerkraut and drizzle with dressing. Cover with other slice of bread and press for a minute. Cut in half and enjoy.
Cooked by Chiara "Kika" Assi at 1:52 PM