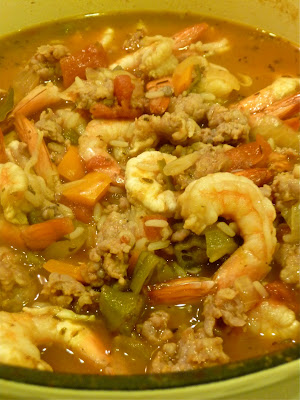 I've never been to New Orleans. I was supposed to go in September, but then we decided to put off the trip a couple of months. I was supposed to go in December, but I went and broke my kneecap, which kinda put a dent in our travel plans. And now that I've lost my job, it looks like the only traveling I'll be doing any time soon will be the big moving to Europe thing. For the time being, the closest that I'll get to the Big Easy is eating gumbo, which I make with a recipe that isn't traditional at all.

So even when it comes to cooking I'm not getting any closer to New Orleans. I guess it just wasn't meant to be.

Said recipe comes from a Weight Watchers cookbook, of all places, but let me tell you: don't let this tidbit of information scare you away. It's a solid, good recipe and to be honest it doesn't feel or taste like a low calorie, low fat recipe at all. The broth is rich and aromatic, the vegetables add substance and, most of all, I doubled the amount of sausage the recipe called for, so there. No wonder it didn't taste low fat...

In a large Dutch oven, heat up the oil, add the sausage and stir to crumble. Cook for a couple of minutes. Add bell pepper, celery, garlic and shallot and cook for about 5 minutes, until tender. Stir in the tomatoes, broth, okra, thyme, bay leaf and cayenne pepper and bring to a boil. Reduce heat, cover, and simmer for 15 minutes.

Stir in the rice, cover and simmer for another 15 minutes. Add shrimp and cook for another 5 minutes or until done. Remove bay leaf.
Cooked by Chiara "Kika" Assi at 9:17 AM