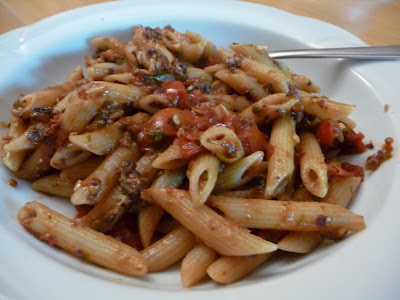 Surprises. You either like them or you don't'. I don't. And that isn't because I'm sort of grump that doesn't enjoy the spontaneous moments in life. Au contraire, I don't like surprises mainly because I have some type of sixth sense that tells me there is something going on —a surprise namely— and because I'm generally such a hopeful, positive person I tend to imagine said surprise to be something awesome, something a lot more awesome than what it actually is. And that, my friends, means that when I'm face to face with said surprise I have to act all happy and cheery, much like when I was nine and my great aunt gave me a house plant for my birthday. I mean, can you imagine being nine, hoping to get some cool Lego or a cuddly teddy bear, and getting a begonia instead? But of course I had to act all happy about it because my mom, from across the room, was giving me that "look happy" look. Faking happiness is not my style, but sometimes, alas, especially when it comes to surprises, one has to do it.

The other aspect I don't like about surprises is the suspense. Don;t you hate it when you walk into a room and everyone in it is on to something you don't know? They look at you, all expectant and barely able to contain themselves, and then —of course— someone yells "Guess what?"

Seriously, spare me the guessing. I loathe guessing. But you have to do it anyway, because they are relentless and everyone calls you a party pooper if you don't. So I guess. My guess usually is "you just got a promotion!", said with genuine enthusiasm and a tiny little hint of envy. Nope. I never guess it right. These days, because my friends are apparently getting old of the sudden, the only possible answers to their guessing game are either "We're getting married" or "We're having a baby". And since I'm not a wedding or a baby person there goes my "look happy" face, the one I learned to make when my great aunt gave me house plants for my birthday.

Of course there is such a thing as a good surprise, one that doesn't involve secretly planned birthday parties or guessing what happened. As it often happens in my life, most good surprises come from the kitchen —either mine or someone else's— or, in this case, from a cookbook I bought a while ago when I realized I was missing my cookbooks like crazy. Yes, people, the two things I miss the most about Florida are my boyfriend and my collection of cookbooks.

Anyhow, when I think of pesto, I usually think of the traditional Ligurian kind made with fresh basil, pine nuts, garlic and olive oil. Little did I know that other regions —Sicily and Calabria for example— also make their own versions of it and use it over pasta or over toasted bread. The following recipe hails from Southern Italy, from Calabria, and let me tell you, it was so good it made me want to go there...


Cook pasta according to directions. In the mean time wash and cube the cherry tomatoes. Place garlic, pine nuts, capers, olives, basil and sun dried tomatoes in a mixer and pulse until you obtain a coarse paste.

Heat olive oil in a large pan, sautee cubed cherry tomatoes for a couple of minutes, add the garlic and basil mix and season with salt if needed.

When pasta is cooked al dente, drain it, add it to the pan, sautee for one minute, stirring to combine with sauce and serve immediately.
Cooked by Chiara "Kika" Assi at 3:58 AM