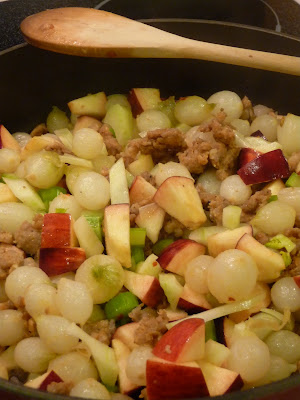 Do I have a picture of the actual stuffing with deliciously browned bread and all? No. And why is that? Because this year I decided to go and injure myself right before Thanksgiving dinner was done. As a matter of fact, putting the stuffing together was the last thing I did before I slipped and hurt my knee so badly I had to spend the rest of the night with my ass parked on a chair and my left leg up in the air, ice on the knee and all.

How on earth did I manage to hurt myself that bad, one might ask. Actually a lot of people asked, including my mother. Her and dad showed up at my house shortly after the accident bearing gifts of cranberry sauce, pear pie and lots of good quality red wine, only to find their daughter sitting on a chair, chugging a martini and -I'm not ashamed to admit- crying a little. I wasn't crying for the pain, although it did hurt. I was crying because I was so royally pissed and I felt so useless, sitting there, having to tell everyone else what to do to finish the feast I had started to cook. My mother, of course, sprung into action and made the gravy for me, while someone else put my stuffing in the oven. The question though -how did you manage to fall- was still being asked because, according to my family and friends, only old ladies fall down in their house and break their hip. Granted that I didn't have a broken hip, they were still curious. And the answer is really simple: I was rushing around the kitchen and slipped on some water -water that had dripped from one of the coolers, possibly the one were I brined the turkey. Anyway, that's it. That easy. One second you are up and moving, the next you are sitting on a chair with a knee brace and a doctor's appointment on Wednesday. But the good news is that the stuffing turned out great, which made me particularly happy because I love stuffing and I made this one up instead of following the recipes I had. And for those of you who are wondering what happened to my great plans of making a second stuffing with oysters in it... well, you can figure I wasn't exactly in the right shape for that.

In a large skillet brown the sausage in its own fat, crumbling with a wooden spoon. Cook until browned, about 5 minutes. Add frozen pearl onions and sprinkle with brown sugar. Cool until the onions are tender and sugar has dissolved, about 8 to 10 minutes. Add celery, fennel and apple (I left the skins on for color, but you can remove them if you like.) Season with salt and pepper, sprinkle with thyme and cook for about ten minutes.

Spray a 10x13 baking dish with cooking spray. Mix vegetable mixture and bread cubes in it. In a small bowl beat the eggs into the broth. Season with salt and pepper. Pour over bread and veggie mixture, toss to coat. Bake in a 400F oven for 45 minutes.
Cooked by Chiara "Kika" Assi at 1:08 PM

Email ThisBlogThis!Share to TwitterShare to FacebookShare to Pinterest
Labels: Side dishes, Thanksgiving