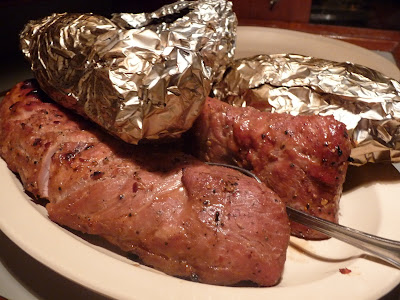 For those of you who are wondering, no, this pork tenderloin is not stuffed with crabmeat (which I'm allergic to anyway) or topped with a skewer of plump Gulf shrimp a la surf & turf. The reason why this pork tenderloin is called "maritime" is because it was made with a lot of love and lots and lots of swearing on a sailboat. I've been down in Key West since Thursday night and, unfortunately, I'm going home tomorrow. But still there have been many fun times, including the making of this pork.

Friday, the 13th, we had no bad luck. But over the weekend, and even today, we had some -let's call them- "moments". Today, for example, we went 7 miles out in the inflatable to dive a new wreck and, of course, the current was so strong we had to give up. Oh, well, we could still go sailing, no biggie. We get back to the marina, get on the sailboat (which is our floating house for the week) and get all read to go. Battery dead - no way we could idle out of the harbor. Yes. No comment.

So instead of going for a sunset sail and spending the night out in the bay on a hook, we went and watched sunset at Mallory Square missed it because traffic was more retarded than usual and ended up scarfing down raw oysters at the Half Shell again (that part of our day I enjoyed a lot!)

When we got back to the marina and on the boat, though, we had the pork I had so zealously marinated all day and Tommy cooked it on the grill with some sweet potatoes -the perfect ending to a less than stellar day. But you know what? I'm still on vacation. So who cares how stellar a day is or isn't or how crappy m food photography can be. This is Key West. People start drinking at 10 a.m.

Sprinkle pork tenderloins with salt and pepper to your liking. Put pork in a ziploc bag and pour in all other ingredients. Swish around and refrigerate for a few hours, turning occasionally to coat. Discard marinade and grill pork on medium high.
Cooked by Chiara "Kika" Assi at 10:09 PM