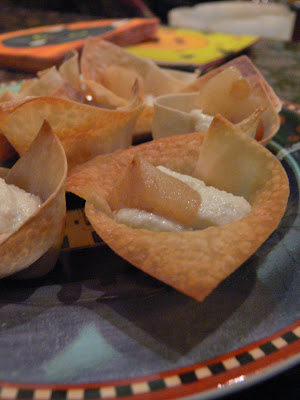 Gorgonzola and pears. A match made in heaven. If you have never tried it, do so immediately -you'll be hooked for life. It sounds like a strange combo, but the tangy and sharp gorgonzola shines when paired up with sweet pears. In Italian we even have a proverb that says "Al villan non far sapere come e' buono il formaggio con le pere", which means don't tell the farmer how good pears and cheese are together. I'm not sure why -perhaps the farmer would eat all the pears and there wouldn't be any left for us?- but then again most proverbs are silly to say the least.

Back to the dish in question... I made this on Saturday for my mom's Halloween party and it was quite the hit. The original idea was to use those little frozen pastry shells, but after seeing how expensive they are (something like $6 for a box of 12 or 15) I decided to experiment with wonton skins. I had used them recently to make ravioli and discovered that they are delicious and cheap, so I thought, why not try and make little baskets out of them? They turned out perfect -pretty to look at and crunchy- so I added one more thing one can do with wonton skins to my ever-growing list. Who would have thought?

To make the baskets you'll need a mini-muffin pan. Spray it with cooking spay and gently stuff a wonton skin in each hole. Bake in three batches for 7 minutes in a 350F preheated oven. Remove from muffin pan and place on a tray to cool.

Mix the two cheeses in a bowl using an immersion blender and season with salt to taste. Set aside.

Cut pears into 36 bite-sized pieces, place in a skillet, sprinkle with brown sugar and douse with brandy. Add the cloves and simmer for about ten minutes, until caramelized.

Assemble the baskets just before serving, spooning a little cheese mixture in each and topping with a piece of pear.
Cooked by Chiara "Kika" Assi at 10:03 AM