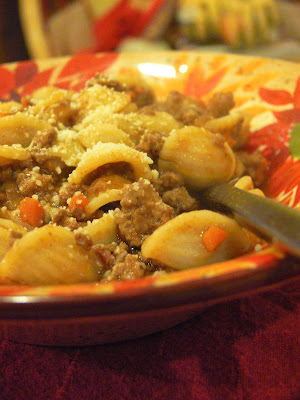 When I was little I didn't like meatsauce. This tidbit of information probably won't shock anyone since I have confessed more than once that I used to be a pain in the ass picky eater when I was little. It all started in preschool. I went to a Montessori preschool in Milan and absolutely loved it. We were free to learn what we wanted to learn at our own pace, we could move our little desks wherever we fancied and lunch was served in a beautiful room that had an aquarium in it. It was the best three years of my life and I wish that I could have gone to a Montessori elementary, middle and high school. Hell, I wish I could have gone to a Montessori university and maybe landed a Montessori-style job. Wouldn't that be fun? Being able to to as you wish, getting stuff done because you want to and not because someone is going to fire you? Instead I receive e-mails from HR that remind all of us that we should keep cutesy personal objects on our desk to a minimum and that leggings are not proper office attire. It goes without saying, I wear leggings pretty much every day and have taped the cutest picture of my cat to my cubicle. Yes, I'm a rebel like that.

Anyways, back to preschool. I only have one bad memory of those three years and it has to do with food. Meatsauce, to be exact. On the first week I was attending preschool, on Wednesday, the menu taped on the door read "Vulcano-style meat". It turned out to be nothing other than meat sauce and I hated it. Because we were not allowed to throw away food I sat in the dining room for two hours, well after all the other kids had gone out to play, and had to eat the whole thing. After that incident, every Wednesday, my mom would leave a not asking to subsitute my meal with ham and carrots. See, at the Montessori preschool they did that. They substituted your meal if your parents asked.

And so meat sauce, for a long time, was taboo at my house, until I grew out of this ridicolus stage and started loving it.

Mince the bacon and brown it in a little olive oil in a large stock pot. Mince the vegetables and add them to the same pot. Sautee them for about five minutes. Add the ground meat, season with salt and pepper to taste and cook until browned, stirring frequently.

Add a couple of glasses of red wine, lower heat and simmer for 20 minutes.

Add enough beef broth to cover the meat, throw in the bay leaves, cover and simmer on very low heat for a couple of hours. Serve over orecchiette.
Cooked by Chiara "Kika" Assi at 12:18 PM