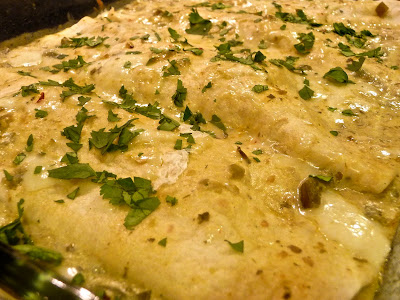 Every once in a while Tommy stops by our friend Jayne's house to have a beer with her and her husband Bruce before dinner. And because they tend to eat dinner way earlier than us —which is no surprise since we usually dine around 10 p.m.— he sometime comes home very excited about some recipe he has just tasted while at Jayne's house. Of course there is no way he can actually remember all the ingredients or even what the recipe was called, so our conversations go more or less like this:

So after a week or so we usually happen to be at her house and I remember that I'm supposed to ask her about the mysterious casserole. After five minutes of vague descriptions on Tommy's part and puzzled looks on Jayne's face we finally arrived at the conclusion that the mystery dish is these chicken enchiladas with green chile sauce. Tommy was right —it's possibly the best Mexican dish I've had along with my beloved pork tacos from yesterday's post. It's spicy and creamy, without being too heavy. So thank you Jayne for remembering which recipe Tommy was talking about and for giving it to me!

Heat a little oil in a large skillet, add onions and garlic and cook for a couple of minutes, until fragrant. Add chicken, season with salt, pepper and cumin. Cook over medium high heat until chicken is browned. Remove from pan and set aside.

To make sauce add ingredients for sauce in the same pan you used for the chicken and stir until lightly thickened. Pout half of the sauce on the bottom of a 9x13 baking dish.

Place 1/4 of the chicken mixture in each tortilla, top with a tablespoon grated pepperjack, roll up and place each tortilla seam side down in the prepared baking dish. Pour remaining sauce over the tortillas and sprinkle with remaining cheese. Bake uncovered for 15 to 20 minutes. Garnish with cilantro.
Cooked by Chiara "Kika" Assi at 2:19 PM