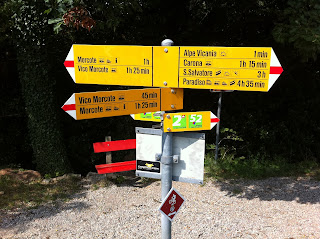 ...I admit it. I'm sick. The travel bug is back, stronger and meaner than ever. This time it looks like it's going to take over my body, my mind, my whole life worse than the other times before.

It got into me a little bit last year, but the problem was I had no freaking money to travel with, so I couldn't do too much about it. Then I got a job and, almost instantly, I started itching for some more travel. New destinations. New adventures. Even if just for a weekend.

Then this morning, while I was looking for a my scarf, I came across a travel wishlist I had scribbled when I first moved to Switzerland, a year and a half ago. I have it here, on my desk. And it makes me smile, because it's awesome. But it also makes me want to pick up my crap and just go.

Seriously, every time I walk by the Lugano train station I feel this urge to jump on a random train and go wherever. But since working is a necessary condition to have money for traveling, I won't do it. What I will do is make sure I go to each and every place on my list as soon as possible.