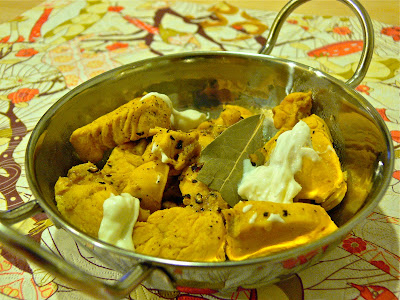 If you had to pick one kind of ethnic food to eat for the rest of your life, what would it be? As much as I love Thai and Vietnamese, I think mine would be Indian. And it goes without saying that I live in a metropolitan area where there are only three Indian restaurants -two of which are ridiculously far from where I live, and the third one is so expensive you'd think you are at a top rated French bistro. This, of course, sucks, because I grew up a stone's throw away from Bombay Club, the best Indian restaurant in Milan and, as far as I'm concearned, in the whole world. When Tommy and I were visiting my hometown two years ago we went there all the time and, on our last night in Europe, I managed to forget my purse under our table. It wouldn't have been such a big deal, but my passport happened to be in there and we had to catch a flight to Miami the very next morning. I don't think you have to be Sigmund Freud to figure out that inconsciously I didn't want to come back to Florida.

Anyhow, the purse was retrieved and we did come back to Florida and we also came back to the lack of good Indian food, so shortly afterwards I bought a book called "Fresh Indian" and started trying some recipes. Most Indian fare takes a while to make, as meats are braised in liquid for a long time, but this dish, the pepper chicken with jasmine rice, takes less than 20 minutes to cook and it's a very, very satisfying dish on a damp and chilly night (yes, the weather is still sucking here in Florida, so for those of you who are palnning vacations: wait until April!!!)

In a large frying pan heat up the oil, then add the peppercorns, bay leaves and cloves. Stir fry for a minute, until fragrant. Season chicken with salt and add it to the pan along with the minced garlic and ginger. Stir and cook for a few minutes, until chicken pieces start to color.

Add broth, curry powder and turmeric and stir well. Cover and cook for 10-12 minutes. Drizzle with yogurt and serve over jasmine rice.
Cooked by Chiara "Kika" Assi at 3:04 PM