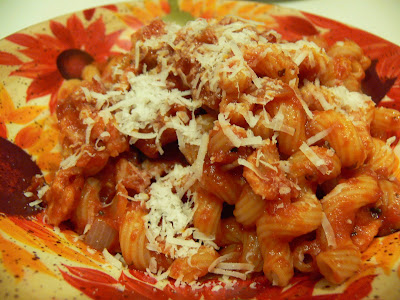 On the last night our good friends Erica and Jeff were in town from Michigan we were all worn out and tired from four days of too much drinking and not enough sleeping. Earlier in the day, when we were halfway sober and ambitious, we had decided to make cheeseburgers by the pool for their last dinner in town, but then the weather turned from shitty to shittier, and we all went into a semi-catatonic vegetative state on the couch, which meant one thing: nobody wanted to go to the store anymore and nobody wanted to grill by the pool either. So, as it always happens when I have to come up with something quick and easy to make, I turned to my Italian origins and made pasta.

This particular recipe hails from the town of Amatrice, near Rome, and is so simple to make it's almost a joke to post the actual recipe. But here it is, so Erica can try and make it in Grand Rapids.


Cook pasta according to directions.

In the meantime heat up olive oil in a large skillet, add onions and bacon and cook until translucent, about 5 minutes. Add tomatoes, season with crushed red pepper and keep cooking until warm. When pasta is ready, drain and add to the skillet, to mix with the sauce. Ladle into bowls, top each bowl with cheese and enjoy immediately.

NOTE: don't put any salt in the sauce -the bacon and the cheese are both very salty and infuse flavor to the sauce.
Cooked by Chiara "Kika" Assi at 2:08 PM