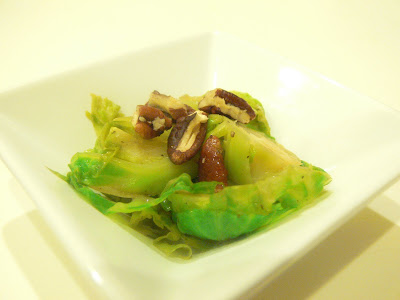 It's my birthday. I turn 29 today and -apparently- your 29th birthday is "the golden birthday", something I never knew until today at least 10 people mentioned it on Facebook. I thought it was going to be a cool birthday because I'm turning 29 on the 29th of the 9th month of the 9th year of the millennium. Yes, I do have too much time on my hands and spend an alarmingly large part of my day musing about stuff that is completely useless. So last night I decided to make something different, something that would surprise most people that know me when they see this post: Brussels sprouts. Why, you ask? Because in my entire life I've never eaten them, short of one little piece once, many years ago, just to determine that they were a horrible, wretched vegetable that I would never eat again.

But of course the good guys at the co-op had other palns in mind. They delivered me a truckload of Brussels sprouts and -after parking them in the fridge for a while- I decided that last night would be the night. A few hours before my golden birthday I thought, why not? So I made them, following a Christmas recipe from Cooking Light, and guess what? They turned out delicious. Either that or I'm getting so old I'm starting to like old people food -you decide.

In a large skillet melt the butter and sautee the onions and shallots. Add the Brussels sprouts and season with salt and pepper to taste.

Sautee for a few minutes (about 4 or 5), add sugar, thyme and chicken stock. Stir, cover and simmer for a couple of minutes or until tender. Top with toasted pecans and serve.
Cooked by Chiara "Kika" Assi at 3:25 PM

Email ThisBlogThis!Share to TwitterShare to FacebookShare to Pinterest
Labels: Side dishes, vegetarian