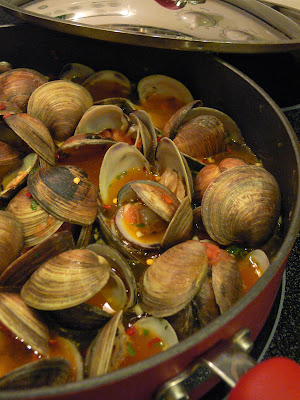 I learned to love clams when I was very young, so young that no one would have ever thought I might like them. It was one and my parents and I were vacationing on the beautiful island off the coast of Tuscany called Isola del Giglio. When my mom ordered spaghetti with clams she had no idea they were going to find out the biggest (littlest) clam fan ever. As soon as the spaghetti with clams was in front of my mom I started picking clams out of her plate, reaching over from my high chair and using my tiny, fat fingers to remove the clams form their shells. I don't know if it was the salty brininess of the clams or the fact that they were "grown-up" food -what I know is that my mom that night ate spaghetti with olive oil, parsley and no clams.

Since then I've always been a big fan of clams, even during my pickiest years (from age 3 to age 10 I barely ate anything and drove everyone crazy). Nowadays I absolutely love clams in all their forms. Although I love spaghetti with clams as much as your next Italian, I love guazzetto even more. A guazzetto is pretty much the clam sauce you'd put on spaghetti, minus the spaghetti. It's delicious served with toasted bread to soak up the rich, briny broth. For those of you who are in the Naples, Fla., area try the guazzetto at Miramare Ristorante -it's to die for.

"GUAZZETTO" OF CLAMS
For two:

To get rid of the sand in the clams soak them for at least 30 minutes in abundant water and salt. Rinse them under running cold water and set aside.

Blench tomatoes in boiling water for 1 minute to remove skin. Chop and set aside.

In a very large skillet (large enough to accommodate all the clams, that is) heat the olive oil and add clams. Cover and cook for a couple of minutes. Check on clams. The idea here is that they will slowly open as they cook. Keep cooking them. After five minutes throw out the few that haven't opened yet.

Pour the cooking liquid through a fine sieve and reserve it.