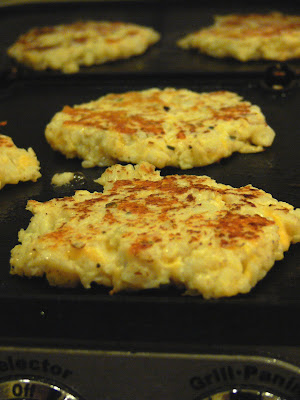 Last night I had an epiphany. I actually like cauliflower.
I spent most of my life telling everyone I didn't like it nor eat it , but once again the guys at the organic co-op forced me to reconsider by dropping a big head of cauliflower in my weekly produce bags. At first I thought about giving it away, but let's be honest: how likely is that? I mean, if I were trying to give away freshly picked strawberries it would be easy, but cauliflower?
Then I was sitting at the office the other day and a coworker offered me her homemade cauliflower fritters. They were good. Very good.
So I decided to keep my cauliflower after all and make my version of fritters with it. Even though I call them fritters they aren't fried. I made them on the griddle with cooking spray to make them lighter -we were already having a monster porterhouse steak as a main dish and really didn't need the extra calories. They turned out great. So again, thanks co-op guys. Keep the veggies coming.

Trim and chop the cauliflower. Steam it for about 15 minutes or until tender. Let it cool down. Chop finely.

In a medium bowl mixed chopped cauliflower eggs, cheese and breadcrumbs. Season with salt and pepper. Add flour a little bit at the time and keep mixing until the mixture is dry enough that you can form patties with it.

Heat oil in a pan or turn a griddle on high and spray with cooking spray. Cook patties in batches, about 4 minutes per side or until golden.
Cooked by Chiara "Kika" Assi at 8:17 AM

Email ThisBlogThis!Share to TwitterShare to FacebookShare to Pinterest
Labels: Co-op, Side dishes, vegetarian