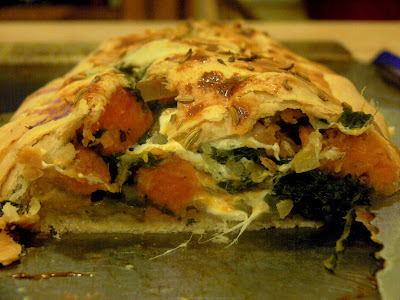 Regardless of the fact that it's hot and humid out -in fact the weather is grosser than what it was in August!- I have decided that fall is here and that I should therefore start cooking my favorite "cold weather" foods. This summer has been particularly brutal, one of the hottest on record, and both my body and my mind have been put through a lot of heat related stress. Although I might have to wait for another 4 weeks to see any real changes temperature wise, to keep what is left of my mental sanity I need to convince myself that the worst is indeed over and that soon I'll be wearing sweaters and making stews.

Hence today's recipe, a quick way to use some good fall vegetables like sweet potatoes and chard (which, now that I think of it, I'm not sure it's a fall vegetable. But, oh well, you get the point!). I first saw a version of this recipe on the cookbook "The Silver Spoon", a more than 50 year old bible of Italian cooking. My grandma use to have it in her kitchen and when they finally translated in English a couple of years ago I bought it immediately so that I could have a copy here in Florida as well. They describe it as an appetizer, but really you can serve it also as a side dish or as a light vegetarian meal. I also saw a version of this recipe on one of my favorite blogs -Il cavoletto di Bruxelles- and in that case the strudel was made with pumpkin and spinach and topped with sesame seeds, but still, very similar.

To make a long story short, I started making this savory strudel last year, after making one too many savory pies and being bored by them. It's versatile, it's easy and with store bought pie crust is so quick to make you'll find yourself making it over and over again.

Heat a little olive oil in a large skillet. Slice the shallot and sautee it in the oil until tender. In the mean time wash and chop chard. Add to skillet and cook with shallot until wilted, seasoning with salt and pepper to taste.

Lay the pastry dough on a cookie sheet covered with cooking spray. Lay half of the mozzarella cubes int eh central portion of it. Top with chard and sweet potato mixture and one more lauyer of mozzarella.

Fold dough over filling and close the two short edges by pinching the dough together. Gently flip it so it lays seam-side down on the cookie sheet. Brush with egg and sprinkle with fennel seeds.