Roasted chicken with onions and potatoes 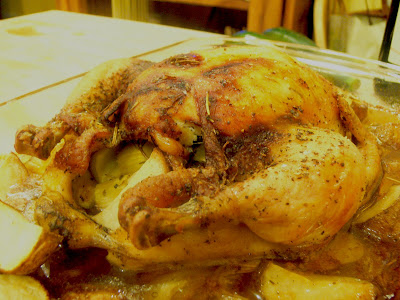 In my never ending effort to be thrifty (so that I have enough money to buy shoes and travel) I have discovered how much cheaper it is to buy whole chickens instead of precut parts. I know, I know, probably I should have known that, but I didn't -plus, I always thought that roasting a chicken would be some kind of a pain in the ass, so I never bothered. Well, I discovered that although it is a little labor intensive in the beginning, once you are done you can relax and drink wine while the bird is in the oven, a prospective I always like on Friday nights when I'm tired and don't feel like dancing around the kitchen paying attention to what is going on on the stove. So I've started to make roasted chicken and after a few times I made it using different recipes and approaches I have to say that the poulet roti recipe in Anthony Bourdain's Les Halles cookbook is by far the best. I added some potatoes and onions to the recipe to have a super easy, no fuss side dish ready at the exact same time as the chicken -it was an extremly satisfying dinner and I can now say that I have a bomb-proof recipe to roast a chicken. I'm pretty proud of myself.

ROASTED CHICKEN WITH ONIONS AND POTATOES

Remove giblets from chicken cavity. Wash the cavity and let dry. Season the cavity with abundant salt and pepper, place the lemon, rosemary sprigs and chopped celery in it.

Now, the trussing of the chicken... I use Anthony Bourdain's trick to truss the chicken, a trick he explains in his hilarious cookbook from Les Halles. Here's what he says: "Okay... now, I'm not going to try and explain how to truss a chicken with twine - as much fun as that is. Here's a shortcut instead. First: lie on your back on the floor, put your knees together, and draw them both up to your chest with your arms. Press them against your chest. You should look pretty funny down there - but that's exactly the position I want you to put your chicken in. Knees up, ass out. Undignified, but effective. Now, take a paring knife and just below the end of the chicken's legs (approximately below where your heels would be), poke a small hole on each side, and tuck the leg carefully inside,pinioning the legs in a position approximately what you just did on the floor. Try not to tear the skin, okay?"

On to the next step. Mix the softened butter with the chopped herbs and season it with salt and pepper. Gently insert your fingers in between the skin and the breast and rub the butter mixture on both sides of the bird so that the butter is trapped underneath the skin. Reserve a couple of tablespoons of butter for later use.

Season the bird with salt and pepper, being careful not to miss any spots. Place it in an oven proof casserole and place onions and potatoes around it. Pour wine in the casserole and distribute the reserved butter on the vegetables.

Cook at 375F for 30 minutes, turning the casserole occasionally so that the bird cooks evenly.

Cranck up the oven to 450F and cook for another 20-25 minutes. Let the chicken rest for ten minutes before serving.
Cooked by Chiara "Kika" Assi at 11:12 AM

Email ThisBlogThis!Share to TwitterShare to FacebookShare to Pinterest
Labels: chicken