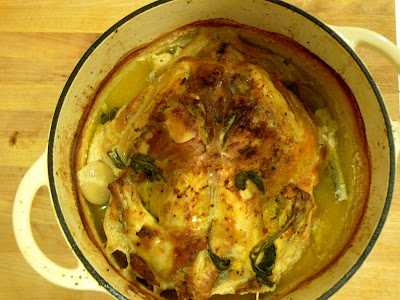 Look! It's Friday and I actually
a) posted something
b) remembered to post a recipe I learned from a fellow food blogger

If you have no idea what I'm talking about, here's a link to last Friday's post where I'm bitching about FollowFridays on Twitter. The point is, I'm going to try, every Friday, to post a recipe I have discovered on someone else's blog. That way not only you get a good recipe, you also learn about an amazing food blog.

Anyhow... this week I have discovered that in November everyone (well, everyone except me apparently) was talking about Jamie Oliver's crazy new recipe -chicken cooked in milk with lemon and cinnamon. Now, before you hit the "back" button on your browser and never come back again, let me tell you this: it sounds like a disaster waiting to happen, but I swear it's good. And if you don't believe me, see what Shiv from Pithy and Cleaver has to say about it. That's where I learned about this recipe in the first place -and her pictures are so great, I couldn't resist. Plus, I reasoned, if veal and pork are good cooked in milk, why not chicken?

Well, let me tell you this: I am glad I tried it. It wasn't just good, it was delicious. The meat was tender and juicy and the sauce, once strained, was lemony, garlicky and finger-licking good. The chicken smelled so good we actually had to put the cat in the laundry room because he looked like someone who's on a mission to jump on the cupboard and steal the bird. We promised him we would give him a little piece of chicken later on, but then it turned out to be so good that we ate all of it -yes, just the two of us.

CHICKEN IN MILK
(adapted from Pithy and Cleaver)

Preheat the oven to 375F

Pick a a dutch oven that has a well-fitting lid and that would fit your chicken snugly. Melt the butter with the oil over medium-high heat, season the chicken generously with salt and pepper and then fry it in the butter/oil mix until the skin is uniformly brown. As Anthony Bourdain would say, be careful not to tear the freakin' skin.

Remove from heat and drain off the butter and oil from the pot.

Add the milk, cinnamon, lemon zest, sage, and garlic to the pot with the chicken. Place in the oven and cook covered for 1/2 hour; remove the lid, and then cook for another hour.
Cooked by Chiara "Kika" Assi at 5:05 AM