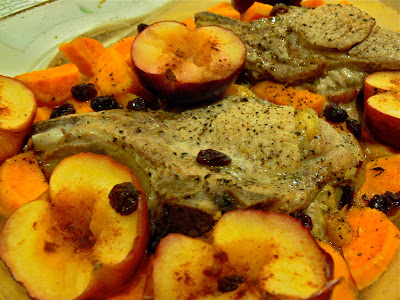 This morning I went to the farmer's market and, as predicted, it was a real zoo. And may I ask what the hell is wrong with pushy old people that practically walk over you to get their hands on the tomatoes? I mean, geeze! I tried to get to the tomatoes for about five minutes and eventually gave up because these old ladies just wouldn't decide which ones to choose and in the process kept elbowing me to keep me from reaching the case. The funny thing is that -due to the temperatures in the 20s and 30s we experienced at night for a couple of weeks- the produce at the farmer's market today looked pretty crappy. Regardless of that, these ladies were acting as if they had never seen better tomatoes in their life -so I let them have them, while I stocked up on squashes, onions and potatoes.

So it looks that this winter we won't be having the usual beautiful, tasty tomatoes and that we'll have to survive on recipes that were clearly not intended for Florida. These pork chops are a perfect example. I found the recipe in Susan Branch's "Heart of the home", a collection of recipes from Martha's Vineyard. Of course I changed it a bit but that with me it's a given.

Peel and cut the potatoes in large chunks, then boil them for about twenty minutes. Heat a little oil in a pan, season chops with sal and pepper and brown them on both sides in the oil -about two minutes per side. Remove from pan and with a sharp knife cut a deep slit in the side of each chop.

To make stuffing melt a little butter in a pan, cook onion and celery in it until soft, seasonw with salt and pepper and add breadcrumbs or cubed bread. Fill each chop with stuffing.

Place stuffed chops and sweet potatoes in a baking pan. Halve and core the apples and place them around the chops. Sprinkle with raisins. Sprinkle apples with cinnamon and season the whole dish with salt and pepper. Cover the pan with foil and cook for about 30-40 minutes.
Cooked by Chiara "Kika" Assi at 3:38 PM