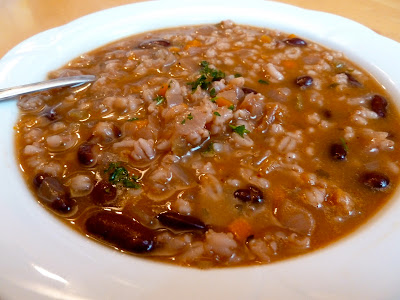 So I guess that winter is almost over. Or at least it is over here in Southern Switzerland. I was so looking forward to be spending a "real" winter —with snow, fireplaces and the likes— that the longer and colder part of it flew by without me even noticing. Back in October, I can admit this now, I was a little concerned with the approaching season. After ten years in Florida I wasn't 100% convinced I could make it through without missing a beat, the way I used to go through it when I was a kid or a teenager. Well, I guess I was underestimating myself. November, December and January went by a flash and just like that the snow, the Northern winds and the fog quickly became a thing of the past. It is now almost March —can you believe that?— and, regardless of what old, pessimistic village drones say, the worst is over. Every day the sun shines and high temps are in the low 60s. Excuse me if I'm optimistic and I call it early spring... but it just feels that way.
So with that in mind, I've decided to get wintery food out of my system by cooking a few more wintery dishes before the new month starts. Because March, my friends, means spring and spring means asparagus and broccoli and baby spinach and all that good, green, fresh stuff. So while the temperatures still dip into the 30s at night I've made a big, steaming batch of one of my favorite soups: barley and cannellini beans. It's hearty, but it's not 100% wintery if you ask me. Why? Because it's damn good even cold, that's why.
BARLEY AND BEAN SOUP
Adapted from Cooking Light
Sort and wash beans; place in a large saucepan. Cover with water to 2 inches above beans; bring to a boil. Cook 2 minutes; remove from heat. Cover and let stand 1 hour. Drain beans. Wipe pan dry with a paper towel.
Heat oil in pan over medium-high heat. Add onion, parsley, celery, carrot, and basil; cook 3 minutes, stirring frequently. Add beans, 9 cups water, vegetable broth, and bay leaves; bring to a boil. Reduce heat, and simmer 1 hour and 15 minutes or until beans are tender. Discard bay leaves.
Place 3/4 cup beans and 3/4 cup cooking liquid in a blender; process until smooth. Return pureed bean mixture to pan. Stir in barley, salt, pepper, and hot sauce; bring to a boil. Reduce heat, and simmer 30 minutes or until barley is done. Ladle soup into individual bowls; sprinkle with cheese.
Cooked by Chiara "Kika" Assi at 7:32 AM