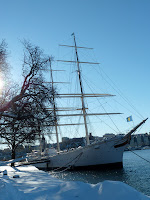 There’s something to be said about sleeping on the water. No matter if it’s a small lake or a great big ocean. And no matter if I’m on a row boat or a gigantic cruise ship. The gentle rocking and the general coziness that only a boat cabin can convey are enough to make me fall in the deepest, most peaceful of sleeps. So imagine my excitement when I discovered that several hostels in Stockholm are located on ships, barges and boats of all kinds. I ended up picking the Chapman for several reasons. The first one was the location: thus ship is anchored on one of the city’s coolest islands, which is also home to the Modern Art and the Architecture museums, with sweeping views of the old town Gamla Stan and the East Bank. The second reason was that the Chapman, unlike many other ships, has some serious history, a history you can feel as you walk down the long white corridors with their old wooden floors and military looks. The cabins themselves are as cozy as they come, with comfy and modern wooden bunk beds, plush comforters and a porthole overlooking the bay. 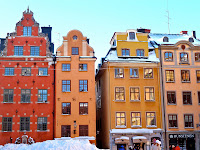 All this to say that waking up in cabin 27 of the Chapman on Saturday was pretty damn cool. Breakfast was cool too, in a Nordic kind of way. As my friend and I scarfed down hard boiled eggs, smoked ham, salted butter and fresh brown bread we couldn’t help but overhear the horrified (and embarrassing) comments of some other Italians, who were practically crying because there was nothing “sweet” to eat for breakfast. Which, by the way, wasn’t entirely true. Hadn’t they been too busy looking for a cappuccino and a croissant they would have noticed that there was raw honey and lingonberry jam —both sweet and both absolutely delicious with smoked ham. But enough about annoying fellow Italians acting like babies while traveling abroad. We had some sightseeing —and of course some eating— to do. As much as we would have loved to check out every museum and gallery in town, we are both pretty broke and at about $12 a pop to get into most attractions we tried to do as many “free” things as we could on our first whole day in the city. 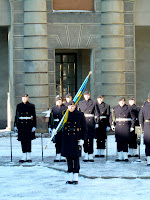 A great way to do so is crossing the bridge to Gamla Stan, the old town, and get lost in its narrow streets, checking out the architecture, the churches and the streets themselves, which are a work of art. Nordic cities and towns have a particular charm, especially for Southerns, not only because they are impeccably clean, but also because the bright yellow, orange and red buildings really pop out when surrounded by several feet of amazingly white snow. I have no idea how they keep their snow clean around there. I mean, everywhere else I’ve been the snow turns into a nasty, smog infested mess within hours. In Stockholm it's so white, you start wondering if it’s real. Then you start feeling your feet going from warm to cold to frozen within minutes and all doubts fly out of the window. It’s the real stuff. While wandering around the old town we accidentally bumped into the change of the guard, which happens in front of the Royal Palace every day at 12:15. I can’t say it was the most exciting thing I’ve ever seen —to be honest it was pretty dull, and the crowd was so thick we had to climb on top of a snow bank to take pictures, which resulted into some very cold snow getting into my boots and, incidentally, a pit-stop at a bar to warm ourselves up with some beer and acquavit (vodka). 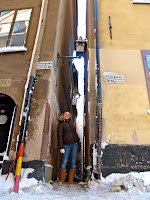 Much cooler was to see Stockholm’s narrowest street, which is less than a meter (3 feet) wide. As you might notice from the picture the beer and acquavit had already worked their magic, as I for some reason thought it would be a good idea to walk around with no hat on in 15 F degree weather. In the afternoon it was time to visit the hip neighborhood of Sodermalm, which my friend the architect wrongly assumed to be the furniture design neighborhood of the city. Turns out it’s the fashion quarter of Stockholm, where all the young and the good looking locals go buy their clothes. Needless to say I couldn’t resist the temptation and scored a couple of shirts and a skirt that I absolutely could(n’t) live without, while my friend ogled the cute girls that worked in the stores. 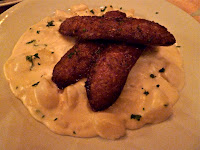 Frozen to the bone and starving because we had skipped lunch, we decided that a traditional Swedish dinner was in order and dragged our tired asses to Zum Franziskaner, one of Stockholm’s signature restaurants. The place was so dark inside I could barely take pictures of it. Our waiter had a no-nonsense attitude that immediately made us feel touristy and naïve, which is why we ended up ordering a ridiculous amount of food, lots of Swedish draft beer for my friend and, here’s the kicker, vodka on the rocks for me. Mr. Waiter suggested, with a smirk, that that’s what a real Swede would have drunk with my meal back in the good ol’ days. And of course I couldn’t pass up the opportunity to show him that, even if I don’t have a drop of Swedish blood in me, I can drink some vodka. He was impressed, I think. We were impressed too, both because the food was flawless and because the portions were outlandishly big. We shared gravlax for an appetizer —fennel marinated fresh salmon served with dill mustard and onions— then ordered the two most incredibly hearty, heavy dishes we could find on the menu. 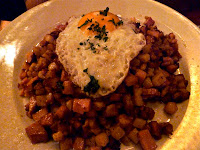 One was Swedish country sausage deep fried and served over boiled potatoes smothered in a sauce that reminded me of what the lovechild of béchamel sauce and country gravy would taste like. The other dish was a sort of pork, onion and potato hash topped with a fried egg. What can I say? It was very cold outside, and we felt we needed the extra calories. Filled with food and vodka we went for yet another evening stroll down the streets of Gamla Stan, which turned into a Key West-style pub crawl. We never bumped into the White Rabbit again, but I bumped my head on a very low ceiling beam and we definitely bumped glasses and said ‘cheers’ in several different languages —Swedish unfortunately wasn’t one of them— with several different characters in several different bars. Scratch that. Several different Irish pubs. Because that’s where the Italian soccer games where being aired and, of course, that’s where my friend the architect and soccer fan had to be. But in the end, it’s sort of a guilty pleasure for me to do something absolutely stupid while I’m out of the country. Like going to Irish pubs in Barcelona or Stockholm. As for my friend, he won the stupid competition by ordering a weird concoction of Guinness and Baileys, which of course curdled and looked like ten day old coffee in a mug. But the girl bartender who suggested the drink, he said, was very cute. And sometimes cute is just what does the trick.
To be continued...
Cooked by Chiara "Kika" Assi at 8:35 AM