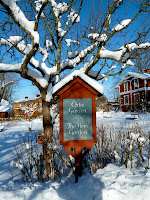 Incredibly enough, on our third day our roommates woke up smiling and telling us they didn’t even know we had come in at some wee hour in the morning. Either they were being incredibly polite or they are completely deaf, because I can assure you that those nautical themed bunk beds cease to be charming when you are trying to climb on one in the dark, at about 3 a.m., with several shots of vodka in you. But they hadn’t heard us, which was great, and we felt like a million dollars, which was also great —and here I'm giving credit to the freezing night temps of Stockholm which, apparently, make you burn off alcohol like you’re freshman in college again.
Since the day before we had done nothing but seeing random stuff for free and bar hopping, we decided it was high time to nourishing our vodka pickled brains with a good dose of culture. We woke up half way early in order to catch a ferry to another one of Stockholm’s islands, Djurganden, home of the world’s first open-air museum, a magical place called Skansen. 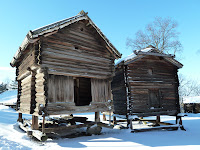 Built in 1891 by historian and anthropologist Artur Hazelius, the museum is a big park where people can still see how Swedes used to live in the past, how they farmed their land, raised their kettle and farm animals and generally went on with their everyday life, from making and selling bread to building their tools. It also features a sort of a zoo, and here I say "sort of" because it only features animals that are native to Scandinavia, who live outside in their natural habitat. And then, because the park is on top if a hill, there are views of the city that are to die for, which to me is always a plus. So Skansen is truly a magical place. Here's an insider tip, though: it's a magical place best enjoyed in the summer, when most of the attractions in the park are open and most of the Scandinavian animals that live there are nor going through their hibernation period. 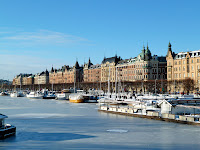 Nevertheless, we enjoyed a quiet late morning walk with the always white, always glistening snow all around us, the sun shining so bright it almost hurt our eyes, and a few uniformed tourists pointing at a moose and calling it a reindeer. All in all it was a roaring success, one that put us in such a great mood we decided to take the world’s longest walk to coast the bank of the sea by Ostermalm all the way back to the island where our hostel —and the museums we wanted to see— are located. For a random stroke of luck, as we entered the Arkitekturmuseet (Architecture Museum) we found out that that day it was 'free entry Sunday', an initiative that takes place once a month to promote interest for the museum. Saving money in Stockholm is no easy task, so we were so happy —and so hungry— we decided to celebrate by having a sandwich and a Carlsberg beer at the museum café, Café Blom. 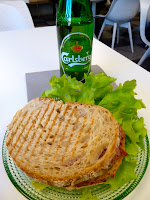 Very uncharacteristically, the girl behind the counter didn’t speak English very well so while ordering the beer was easy, ordering the food proved to be a little trickier. The only word we could both understand was ‘toast’ —which was a good start I guess since a toasted piece of bread with some type of meat filling in it sounded just about right at that time. So I ordered it. She heated it up for me and served it to me with my bottle of Carlsberg. It looked like ham salad, so I took a bite. I have to say, it was the tastier ham salad I’d ever had in my life. It was rich in flavor and had a light but stil perceptible smokiness to it. It was better than any ham salad I had had before. And the reason might be that it wasn’t ham salad at all. It was smoked reindeer salad. So yes, I’ve eaten Rudolph. But, hey, he tasted great on toasted country bread. And you know what they say? When in Stockholm... 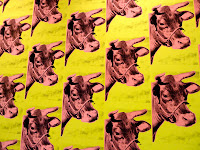 We spent the rest of the afternoon roaming around the Arkitekturmuseet first and the Moderna Museet (Modern Art Museum) afterward. The former was obviously more interesting to my friend the architect, who studied and ohhhed and ahhhd over some 2000 years of Swedish house building history, from mere places to shield men from the elements to state of the art eco homes of the 2000s. The Moderna Museet, on the other hand, was immensely captivating for anyone like me who likes bizarre modern art installations that include splattered Heinz ketchup on a museum floor or a panel that tells you that Andy Warhol has indeed walked those same corridors we were straying through. Because there, my friends, is where Warhol has coined is famous '15 minutes of fame' quote back in February 1968 when the Museum was hosting one of his exhibitions. And although I no longer find the quote particularly witty nor inspiring, I have to admit that it’s always exciting to stand in a place where some kind of history was made. 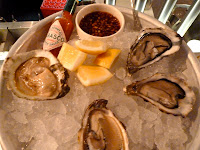 Tired from all the walking we had been doing all day, and clearly in some sort of delirious status,  we decided to walk to bumfuck nowhere in the Ostermalm quarter. After long deliberation, we had decided to try an eclectic fusion brasserie located in an Ostermalm ex electrical plant, where we were pretty sure we would find overprized small portions of nouvelle fusion cuisine —aka the food I loathe the most in the world. But up to that point I had singlehandedly decided every restaurant we had gone to and my friend the architect was seriously excited about observing how they had turned the plant into a restaurant, so I thought, why not?  Thanks to the usual 15 F weather, en route to Ostermalm we stopped at a place called B.A.R. for a cocktail, a modern, hyper hip restaurant and bar curiously located in a side street no one every takes, except people like us who insisted on roaming the city without a map. 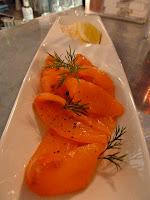 It was packed with young, good looking people, the music wasn't too bad, they made martinis and they served oysters. I was in heaven. We had some of the freshest smoked salmon I’ve ever had the pleasure to sink my teeth in —so buttery the extra pound of butter that they gave us to spread on bread was superfluos and so tasty it was almost a shame to cover it up with the powdered horseradish they served with it. I also ordered a sample of four oysters on the half shell —a fine de Normandie, a fine de moiselle d'Agon, a speciale de claire marenne and a Danish flat oyster— served over ice with the usual lemon slices, horseradish and Tabasco, plus the addition of an onion vinaigrette  which turned out to be a great accompaniment to oysters. It was tangy enough to compliment the natural brineness of the oysters, yet delicate enough to let the oyster flavor shine through. It was a revelation, and a very good one, because once we left B.A.R. and finally made it to bumfuck nowhere in Ostermalm we found out the stupid brasserie is closed on Sundays. Thanks Lonely Planet for not pointing that out, by the way. 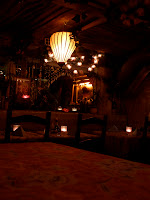 This little incident brought us to Sabai Soong, the most incredibly kitch Thai restaurant ever known to men. And you know how Asian restaurants in Europe can be tacky. Well, this one took the cake, and then some. Christmas lights, Buddha statues, royal family posters, Abba tunes… you name it. It was a clusterfuck of tackiness. But the food was divine. And cheap. And just as spicy as I wanted it to be. My chicken basil with string beans and fried egg (they like to put a fried everywhere in Sweden, even in Thai restaurants) kept me warm and happy all the way back to out hostel, which wasn't exactly around the corner. So thanks Sabai Soong for saving our last night in Stockholm. Your food made my belly so happy that for a few hours I even forgot about my unhealthy obsession to find perfect Swedish meatballs with lingonberry compote. Although I have to admit that I drifted to sleep that night promising to myself that the next day I would have for lunch before catching my plane back to Milano.