On day 4, aka my last day in Stockholm, I was by myself. My friend the architect had to catch a very early flight back to Milano, while mine wasn't departing until 7 p.m. so I had a day alone in the city, although if you ask me, you are never really alone in a city. It's not because of the crowds —Stockholm is one of the least crowded places I've been on Earth— it's because if you feel lonely and you are desperate to talk to another human being, you'll always find someone (usually a bartender who can't run for his life and has to listen to you blabber) to talk to. This isn't true everywhere. It isn't true in woods, deserts, on the ocean, on top of the mountains. I love being alone, don't get me wrong. I'm not a true loner, but I immensely enjoy solitude for long stretches of time. But there's one activity that I love that one can't do if they are alone. And that's people watching. 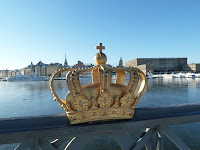 During the first three days in Stockholm we had focused on many things. The elegance of the buildings, the bright colors of the facades, the statues and the spires and the bricks that make the city unique. The peculiar way the sun never really rises above you, even at noon, which makes the whole day look like it's 4 in the afternoon and makes the snow shine like it does in the movies. Design, architecture and fashion. We had focused on all those things, but I had forgotten to focus on the people —the ones that live there, not the whiny Italians at breakfast or the lunatics standing for hours and hours in line, in the shade, in 15 F degrees to see the Terracotta Army exhibit. Don't get me wrong, I'm sure it's fascinating. But if you are in Stockholm for the weekend, why not experience Stockholm instead of China? Just a thought. 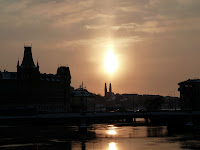 On my last day I was resolved to look at the people, to get a feel of how Swedes go about their life, how they interact with each other (I'm talking about non-verbally here since Swedish is not my forte), how they interact with tourists. When I travel I usually automatically get a feel of how locals do all these things, no matter if I'm in Mexico, Japan or if I'm just in some tiny Italian town I've never been to before. In Stockholm, though, I hadn't. As I was making my way towards downtown, still looking for those elusive Swedish meatballs with lingonberry jam, I realized why I hadn't. It was because unlike, say, Americans or Italians or Spaniards, Swedes are not in your face all the time. Not at all. There's a quiet politeness in their manners that is truly enjoyable. They always smile when they greet you, and they always greet you, but they never ask too many questions or linger on too long when a conversation is over. They are friendly without invading your privacy. They seem genuinely happy, although a little bewildered, to see people visiting their city in the coldest month of the year. Most of all, they seem like happy people. When you walk down the street and look at them, they have a content, often smily expression on their face, even if they are walking alone in the cold wind. They always seem to be thinking of something great they are going to do later on and looking forward to it. So that's another thing to be enjoyed when in Sweden: interacting with locals. And, of course, eating Swedish meatballs. You didn't think I was going to give up, right? Oh, no. Before walking to the bus station and going to the airport I stopped at a restaurant that I will define "old school", but keep in mind that that's the understatement of the year. It was called Guldpumpen Restaurang and it served just what I wanted: traditional Swedish meatballs, smothered in a cream sauce, served with mashed potatoes and lingonberry jam. And let me tell you, I'm glad I had the chance to try them before leaving. Again, Ikea's rendition wasn't exactly up to par. Those Guldpumpen meatballs were tender, juicy, and flavorful —black pepper and nutmeg gave a pleasant spiciness to the dish. And the lingonberry jam, sweet but not too sugary, was as perfect with meatballs as I had imagined for the past three days. I walked out of the restaurant so fulfilled and happy that I had to run back in because I had left my purse under the table. As I walked towards the bus station with the sun setting to my left and the moon rising to my right, I realized I was ready to leave Stockholm. But I was also ready to go back there many, many other times.
Cooked by Chiara "Kika" Assi at 8:02 AM