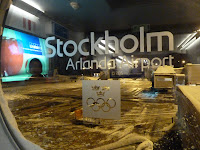 Vordnadsbjudande. That means "awesome" in Swedish —or at least that's what the girl at the hostel reception told me. I sincerely hope she hasn't pulled one of those funny pranks you see in movies when someone asks a local how to say 'I love you' and they tell them something that means 'you smell like rotten eggs'. But Reception Girl seemed nice enough not to do such a thing, so here it is: Stockholm är bra, which means Stockholm is great. Although it's Sweden's largest city —and Scandinavia's most populated city— not even one million people call the city center home, which gives it an incredibly quiet and relaxed feeling. It was a strange feeling I couldn't pinpoint right away as my friend and I arrived at Centralstation with the airport bus. It was about 8 o'clock on a Friday night and... well, everything was quiet. No traffic. No hoards of party goers. No packed sidewalks. It did help, of course, that the city was covered in snow and the temperature was falling fast towards the teens. That of course didn't stop us from setting off in search of our first great Swedish meal even before we bothered to check into our hostel. 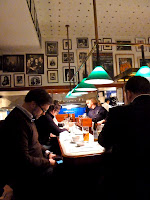 Thanks to the good guys at Lonely Planet, we bumped into a cool little bistro hidden right behind the Opera House. It seemed like the whole town had decided to dine there, but luckily enough we snatched the last two available seats. The place is called Bakfickan (telephone number +46 8 6765800) and it's just the type of restaurant you would imagine to find close to a theater or a opera house: it's small, crowded and stylish in that "time stopped in the 30s" kind of way. The walls were covered in black and white pictures of unknown —to us, that is— Swedish celebrities from the past. The menu wasn't very large, but it had the right balance of traditional Swedish fare like marinated salmon and meatballs in sauce, and more modern dishes, like the steak tartare I ordered. I'm somewhat obsessed with tartare and it's very hard for me to see it on the menu and not order it. I was in luck. I have to say that Bakfickan's rendition was one of the best I've ever had both because of the quality of the meat and because of the way it was presented. It was sort of a fun "do it yourself" tartare where you get the ingredients on the plate, the sauces on the side and you mix it to your liking. 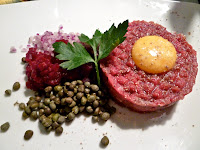 I have to admit I was slightly perplexed when I found a pile of minced beets alongside the beef, red onion and capers, but since it was there I decided to give it a try. See, I've had a childhood trauma that involved beets, which led to my swearing them off my life forever and ever. I'm happy to report that, as of Friday February 11th 2011, I am officially over this ridiculous beet hatred. Not only that, but I also have to say that beets and raw steak go very well together, as the beet adds a certain sweetness to a dish that is otherwise characterized by the very strong flavors of capers, onions, Tabasco and the likes. We finished off our meal with a glass of chilled vodka (what else?) before setting off into the cold and towards the hostel. 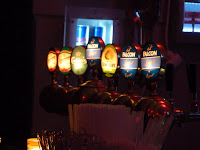 Needless to say, as we were wandering around the old quarter of Gamla Stan we were "too cold not to stop for a drink", as my friend put it. And since beggars can't be choosers, we practically ran into the first place that looked like a bar, but was in fact a club, one of those place that are too hip to even have a name. At 30 I suspect I was by far the oldest person in there, but we played it cool, called ourselves "students" whenever someone asked what we did in life and drank Falcon beer, because that's what all the cool kids were doing there. Just to make a point —the point being that we are still young enough to party like there's no tomorrow— we closed the bar at 2 a.m. 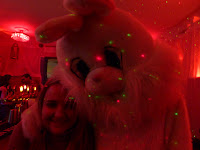 Before we left, though, we bumped into the White Rabbit from Alice in Wonderland. I'm not joking. look at the picture. That's me, hugging the White Rabbit in a bizarre Swedish disco. I had only been in Stockholm for a few hours, but somehow I knew the place was right for me.