Excitement is in the air. After spending two months into what can only be described as a slump —a psychological one, mind you— here I am ready to leave for a new adventure. Two short ones, actually. Tomorrow morning I'm flying to Stockholm, Sweden, to meet up with a friend who's at a conference there. I'm thrilled beyond belief, not only because Stockholm is said to be one of the most beautiful capital cities in the world, but also because salmon is one of my all time favorite ingredients, so you know what I' will be doing from tomorrow until Monday. Yes. Salmon, salmon, salmon, in all its glorious forms, and especially in its most glorious one: Gravlax. Now, of course I make my own rendition and you can find the recipe here, but eating it at the source, surrounded by frozen lakes and people eating herring for breakfast will add a certain something to it, I'm positive.
Then, after only one brief day of relax spent at home and running herrands, on Wednesday morning at 7 a.m. (gotta love those cheap Easy Jet flights), my best friend and I will leave for Amsterdam to celebrate her birthday. I've never been there either, so I'm equally stocked... although I am aware that Dutch food isn't necessarily famous for being exciting or flavorful. Which is why I already have my eye on a couple of Indonesian and Sumatran restaurants that serve exactly what I like: spicy, savory concoctions of meats, vegetables, rice and noodles.
Because I'll be gone for a week, I want to leave you with yet one more of my "best of" posts, one that is 100% Italian: pasta dishes. I've cooked tons of pasta in my life and I've posted many different recipes on this blog, but I think the following five are my all time favorites. At least for now. 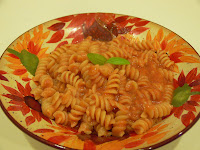 PASTA ALLA VODKA
If you ask any of my American friends what is my best loved, most famous recipes, you'll hear one answer only: vodka pasta! Creamy, spicy, boozy, this pasta dish is sophisticated yet fairly simple to make. The ultimate decadence? Eating it while sipping an ice cold vodka martini. You can find the recipe here. 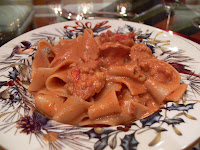 LOBSTER PASTA
Ever since watching "Julie and Julia", every time I hear the word lobster I find myself singing to myself "Lobster killer" to the same tune as the Talking Heads "Psycho Killer". That said, when I lived in Florida I used to catch my own lobster while scuba diving so no, I don't feel bad for killing lobsters. There are plenty of them in the Atlantic, as there are plenty of them in Sardinia, where this recipe hails from. 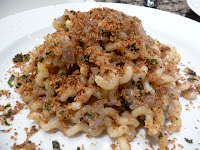 SICILIAN PASTA WITH ONIONS AND CRUMBS
This recipe is relatively new to me, mostly because I grew up thinking I loathed anchovies. And although I still won;t gorge on them, I've reached a point in my life where if anchovies are few and only one of many ingredients I actually enjoy their natural saltiness. This Sicilian dish is the perfect example. Try it ones and you won;t get enough of it. Click here for the recipe. 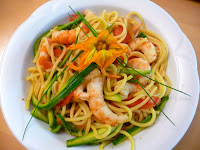 SPAGHETTI WITH SHRIMP AND ZUCCHINI BLOSSOMS
I've learned to make this dish last summer, on a torrid July evening during 2010's only heat wave. The lake was still. The air was humid and felt heavy. There was no way in hell I would even consider leaving my a/c. So I had shrimp and zucchini blossoms in the fridge and thought, why not? The result, even if I do say so myself, was amazing. A star was born. Here's the recipe, and I can assure you that's worth making regardless the outside temperature. 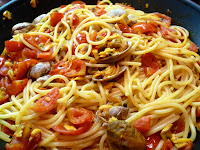 PASTA WITH SAFFRON AND CLAMS
If you are wondering what is up with me and saffron, the answer is easy. First, I find it to be one of the most satisfying and fragrant spices in the world. Second, believe it or not, saffron is not that expensive in Italy. So when I found both littleneck clams and cherry tomatoes on sale on the same day I just knew I had to whip up some type of pasta concoction. With saffron of course. Because, just like butter, it makes everything better.
Cooked by Chiara "Kika" Assi at 4:53 AM