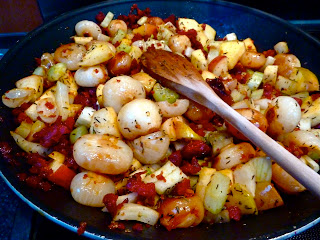 It's almost 5 pm now and I have made some progress. I'm actually proud of myself, since I have baked two batches of cornbread, made homemade pate', cranberry sauce and, last but not least, this wonderful stuffing.

Making this was actually one of the easiest tasks today. I mean, between finding the freaking turkey - which is hard to come by whole in Switzerland - and making the cornbread, I'm already exhausted. It's a lot of cooking, I'll tell you. And right now I'm baking a pumpkin cheesecake, which is particularly stressful for me because I hate baking and I hate making dessert. So you can figure how much I hate BAKING DESSERT.

Anyhow, here's the recipe for the stuffing, which I have tried and is delicious. Trust me, it doesn't get much better than this! 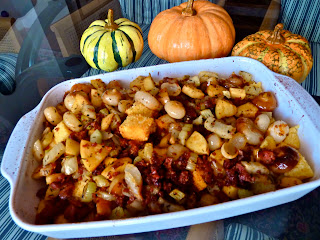 
Cooking spray 2 links hot Italian sausage 10 ounces frozen pearl onions 2 tablespoons brown sugar 2 stalks of celery, chopped 3 small red Michigan apples, skin on, chopped 1/2 large fennel bulb, chopped Salt and pepper, to taste A few sprigs of fresh thyme 1 loaf cubed cornbread (about 8 cups) 2 eggs 1 cup chicken broth In a large skillet brown the sausage in its own fat, crumbling with a wooden spoon. Cook until browned, about 5 minutes. Add frozen pearl onions and sprinkle with brown sugar. Cool until the onions are tender and sugar has dissolved, about 8 to 10 minutes. Add celery, fennel and apple (I left the skins on for color, but you can remove them if you like.) Season with salt and pepper, sprinkle with thyme and cook for about ten minutes. Spray a 10x13 baking dish with cooking spray. Mix vegetable mixture and bread cubes in it. In a small bowl beat the eggs into the broth. Season with salt and pepper. Pour over bread and veggie mixture, toss to coat. Bake in a 400F oven for 45 minutes.